Secret Projects of the Luftwaffe, Heinkel He 162 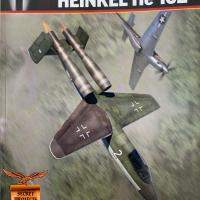 This book takes an in-depth look at the development, selection, and early flight tests of the Volksjager (people's fighter) concept or what became known as the He 162. In the waning years of WWII, the Luftwaffe was desperate for a point defense fighter that could be produced in great numbers with a minimum of strategic materials. Although Germany had a jet fighter in the form of the Me 262, it required a lot of materials to build the airframe and two engines. The philosophy of a small single engine fighter was to build enough to station them close to all the potential Allied targets. This requirement meant the Volksjager could be a small aircraft with limited range. With a minimum of training, it was hoped that He 162 would provide the defense Germany so desperately needed.

It's not surprising that Heinkel ultimately won the contract to build the He 162, especially when you consider they built and flew the world's fairst jet powered aircraft, the He 178 in 1939. If you compare that aircraft to the He 162, it's not hard to see the family resemblance. I’ll leave the details of how the He 162 design was chosen for you to discover. Of interest to me was the amazingly short time it took from approval of the construction contract on September 24, 1944 to first flight on December 6, 1944! The first aircraft was a design-build process in which production drawings were issued as the prototype was built. Tragically, the second flight ended in disaster when the aircraft came apart in flight killing test pilot, Gotthold Peter. What followed were a number of modifications to the airframe to improve roll stability and longitudinal stability mainly by shifting fuel tank locations in the fuselage. For a number of reasons, the potential of this design was never realized. The He 162 was not an easy aircraft to fly and the allied tactical air campaign made it difficult to transport subassemblies. That limited the production rate. Of interest was the cooperation of Heinkel employees with the allied forces after the war. They wanted the allies to produce the aircraft. The book does not address the He 162 combat record.

As a modeling reference, there are some good resources in this volume. The author has included copies of production drawings as well as black and white photos of the prototype under construction. For those “Luftwaffe 46”, fans the book explores numerous configuration studies including some beautiful color renderings on the cover and in the center of the book depicting those variations flying under other nations markings. In conclusion, this volume is a good balance of historic facts and references coupled with what could have been some interesting aircraft. What comes through for this reader was just how remarkable an airplane the He 162 was and how important it is to preserve the record of how it came to be. Highly recommended. Thank you to Casemate for the sample and to IPMS for yet another great reference book for a kit in my stash.