The Douglas A-1 Skyraider 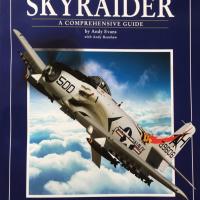 Back by popular demand, the Douglas A-1 Skyraider comprehensive guide, is a third edition reprint.

The Skyraider is best known for its never-ending ordinance delivery load on ground attack missions and supporting Search Air Rescues over the jungles of Vietnam, it was born with neither of those capabilities in mind. The Skyraider started out as a replacement of the SBD Dauntless and eventually the SB2C Helldiver. In June of 1944 Chief Designer Ed Heinemann suggested revamping the entire design and by March of 1945 had a completely different design.

Skyraiders served in the US Navy and Air Force as well as other nations air forces such as France, Gabon, Chad, and South Vietnam.

The book is soft bound with 168 pages, 11 chapters, several black and white photographs of the Skyraider, color pages of different versions, and Squadron markings for the airplane. At the end of the book are bonus 3-view plans for the Skyraider in 1/72 and 1/48 scale. Pictures dominate the book, some in black and white mostly before the Vietnam War, and color pictures during the War.

The modelling section covers the 1/48 Tamiya Paper Tiger II 1/32 Trumpeter Big Dog, 1/48 Monogram Nuclear Spad, and the Tamiya 1/48 CSAR Sandy. The only build article is the CSAR Sandy, all others are different views of completed models.

The Technical Diagram section is eight pages with several sections of the airplane highlighted and labeled. All the diagrams are in black and white line drawings with good detail.

Chapters in the book are listed:

I thought this book was a great reference of the history and the markings of the Skyraider. The A-1E is my favorite version of the Skyraider and it is well documented. I have always had a keenness to the 60’s-era gray over white paint scheme and the A-1E in the navy color scheme is the best.

For anyone interested in researching the Skyraider this book is a must read, especially if building a kit model or scratch building. Scale line drawings at the end of the book provide a lot of detail on the Skyraider.

Thank you to Sam Publications and IPMS/USA for the opportunity to review this book.