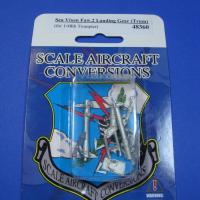 Scale Aircraft Conversions specializes in white metal replacement parts. Its line of replacement landing gear has been expanded to include a set for the Trumpeter 1/48 Sea Vixen.

The set is including 7 parts covering the main landing gear struts and fork. These parts are drop-in replacements for the plastic parts. Considering the size of the Sea Vixen, investing on a sturdy landing gear is likely to be a good idea.

You can see from the pictures the parts are very cleanly molded and formed, without any visible molding lines (typical of plastic parts).

In addition to the listed advantages, when using white metal landing gear you can always ‘tweak’ the landing gear strut for an improved alignment of the parts, which again in a large model airplane is an extra advantage.