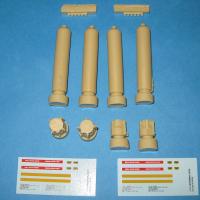 Most people around modern airplane models are aware of the cluster bomb dispensers that have been used for a while now. They are basically carriers of many smaller sub munitions that open and spread the smaller bombs over a wider area. In this case, the WCMD (Wind Corrected Munitions Dispenser) is a tail kit for cluster bombs (CBU-87, 89 & 97) which convert the normal cluster bombs by adding a different tail unit to allow corrections to trajectory based on wind changes allowing for more accurate dispersal. They were first dropped from a B-52 in Afghanistan in 2002. They are currently use on F-16C and F-15E.

Videoaviation.com has issued a set of these munitions. The set comes with front and back parts for four bo0mbs and two sprues of lugs for the attachment points. Also included are decals to cover the bombs and also red remove before flight tags.

Assembly is simple, cut the casting blocks off the front and back sections and make sure your cuts are flat. Glue the parts together, aligning the sections so that the top bar on the tail aligns with the lug holes. I used a little red putty and smoothed it with lacquer thinner. That made it ready to paint. I primed it with Alclad gray. Painting was silver lacquer for the tail, olive drab for the main body with the fuse being silver with a brown cap. The fuses that run along the length of the body are painted black. The body was already glossy due to my use of Xtracolor paints. The decals settled well. I washed the kit to being out the panel lines with a black water color wash and after wiping off, flat coated the bomb and called it good.

This is a wonderful set that can be added to the Tamiya 1/32nd F-16C and F-15E. They are easy to assemble, better detailed and not currently available in plastic from what I can find and would be needed for a current modern plane. I will say that to fully equip a plane will take two sets or so. Highly recommended.

My thanks to Videoaviation.com and IPMS/USA for the opportunity to review this set.