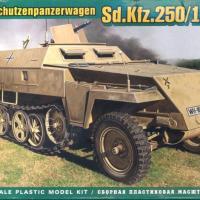 The Sd.Kfz.250/1 (neu) was a compact version of the SdKfz251. Its mission was to carry a scout section for reconnaissance purposes. There was a previous (alt) version which had multi-faceted armor plate which stood up better than the simpler flat plates used by the “neu” version. But because the older version was more difficult to build and cost more, the newer one became the standard in early 1944

The armor of the Sd.Kfz 250/1 could stop rifle caliber bullets and shell fragments, but didn’t stand up to anything heavier, such as a .50 caliber or larger weapon. The half track design was superior to wheeled armored cars when off-road, so the 250 was preferred in many situations.

Ace has produced a vehicle which we haven’t seen kitted previously. ESCI had a 250/9, but it’s a different vehicle in that it has a screened top to prevent insertion of grenades and other litter.

The sprues are a little flashy and the connections between the parts and the sprues are somewhat heavy, as you should expect from a short-run kit produced in a lower pressure mold.

The interior is quite good, with a lot of extra stuff I didn’t expect to find in a kit this size. There’s an MP-40 on the bulkhead next to the right front seat, four stacked KAR-98s on the wall across from the seat, and an extra MG-42 below the rifles. There are also canteens, ammo pouches and gas mask canisters to add at various spots around the interior.

With the interior assembled, I tackled the main body. I had a fit problem with the top and sides of the vehicle. You may not have this problem, but I did. The top fit the sides and rear of the body pretty well, but I had a gap between them at the front, in the engine compartment area, on both sides.

And that’s why I have these tubes and containers of body putty on my workbench. A little clamp, a little fill, some CA for extra hold, and the gap is closed. I used some Mr. Surfacer 500 on the line which remained after filling.

Painting was pretty simple, as I did the Panzer Gelb scheme from Belgium in 1944. I’d like to try the winter scheme some time.

Anyway, overall Model Master ® color, mask the interior with a cosmetic sponge, set the airbrush on “paint the wall” and go for it. The wheels were a little more crafty, but I had my brother-in-law make me some round masks before he retired from his sign-making business. The dots on “I”s and periods from a large banner sign make wonderful round masks for this sort of project.

The rest of the painting was detail stuff for the interior add-ons, like the guns and canteens. So, a coat of Future, and decals.

The decal sheet is pretty simple, but the quality is pretty good. I had no problem getting the markings off the backing sheet, and they stood up well to my pushing and prodding to get them in place and aligned.

I always put the decals on before I add the wheels, external stores, and guns because I am convinced that I’ll break something while trying to align a decal. So now I had to put on the front suspension, the main wheels and tracks and the machine gun at the top.

I discovered that the instructions can lead you astray on the wheels. With no part numbers on the sprue and the parts laid out symmetrically, it’s possible to reverse parts 1 and 3 just by rotating the tree, and there’s no way to tell. Well, at first there’s no way to tell. After you try to put on the other parts, you discover your error.

Another problem I ran into with this project was that the plastic didn’t seem to react well with the standard plastic cements. For the front suspension I used Tamiya Extra Thin cement. It failed. I then used Testors Liquid cement. The parts stuck, then fell off. Testors liquid thickened with tube glue. Nope. Ambroid Plastic Weld. No joy. I finally used Loctite gel CA, which held.

The tracks are “rubber band” type. They’re long enough to fit correctly, but they’re too stiff to fall down on the tops of the wheels. A couple of drops of CA on the wheels, a little push with a dental pick, and they conformed beautifully.

The final things were the tools and light on the front fenders and the machine gun and shield. The tools are fine little parts, and so require some careful separation of the part-to-tree connection to look good. The machine gun is aimed up because I was taught to point the gun in a safe direction in case of an accidental discharge.

Recommended for the experienced modeler. OK, it’s not a box shaker, but it’s also the only 1/72 Sd.Kfz.250/1 you’re going to find anywhere. It’s a buildable model, and the little extras really add a lot to the interior. It’ll add nicely to my shelf of 1/72 vehicles, since it looks good.

Thanks to Ace and Stevens International for providing the review kit, and to IPMS/USA for letting me build it. Also, thanks to my brother-in-law Jim Mc, who provided those wheel masks.