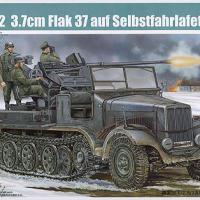 Initially designed as a medium artillery towing vehicle, the Bussing-NAG Sd. Kfz 6 was eventually converted to carry the 37mm FlaK37, providing the base vehicle for mounting captured Russian 76.2mm anti-tank guns, as well as rotary snow plows. The 37mm-armed version, known as Sd. Kfz 6/2, proved more successful, providing army anti-aircraft units with mobile, though unprotected, protection from air attack. They usually carried a crew of seven, and generally towed a trailer containing ammunition and crew equipment. Although useful, they were expensive to produce, and their jobs could be performed by other, heavier halftracks, and they were phased out of production in 1941. The surviving examples soldiered on until attrition claimed them.

This kit consists of over 680 pieces contained on 27 sprues of medium grey styrene (10 of which contain track links), one of clear styrene, 3 photo-etched frets, a one-piece frame, 3 black vinyl tires, and a length of heavy thread to be used as a towing cable. Assembly is broken down into 22 steps, illustrated in a 20 page, exploded view instruction booklet. Parts are called out by sprue letter and part number. A full color painting guide is included, although only one paint scheme is shown, in overall German dark grey. Except for skipping ahead a few times to build structures that would need finishing before installation, I stuck pretty closely to the sequences as shown. Other than building and installing the tracks, I had no fit issues at all with this kit. I made a jig to assemble the links, simply a block of balsa wood with a shallow groove cut down the middle, as these links are (for me) easiest to assemble with the guide teeth down. I faced a dilemma. Since the track pads glue onto the joints between the links, I was afraid the track would not be flexible enough to bend around the wheels if I assembled it completely. However, as it turned out, gluing all the links together tended to obscure the openings where the pads are supposed to fit, making them sit unevenly. In addition, the links fit so tightly onto the drive sprockets I found it necessary to cut off 3 teeth on the front of each. Your results may vary. If anyone has a better sequence, I’d love to hear about it. (see Step 6)

I built the front suspension with the wheels turned, so I left the front wheels off untill all the chassis and cab work was finished. In Step 8, I added a few bits to keep the spare from falling out of its storage rack. Be sure to keep the chassis right side up while the glue dries on the spare (seems obvious, right?). I especially like the texture of the screens for the drop-down sides. The etchings present a great appearance, and they are a dead accurate fit. I left the side panels off of the engine bonnet, as the engine is well made and I like the look. Steps 13 thru 16 cover the 37mm cannon assembly. They have slide-molded barrels, and the holes in the flash hiders can be easily drilled out since the dimples are deep enough to catch your drill bit. The photo-etched gun shields took a bit of tweaking, since they are folded to bring the angled joints together. Once bent correctly, the joints were soldered, then the excess solder was ground down. Steps 18 thru 21 cover building the trailer. I left 2 doors open, putting in some “canvas” tarps, camouflage netting, crew equipment and ammunition boxes (not included).

Painting was accomplished with Tamiya acrylics, using German Dark Grey as the basic color. I lightened the base color 15-20% and added fading effects mostly to the hood top and trailer, followed by various earth-colored washes on the running gear and floors. The 37mm gun and spare barrels were given a good graphite rub-down after decaling and flat coating to impart the metallic sheen.

I found this kit a joy to build, with the single exception of the tracks. The one-piece frame ensures that the model is square to the world, and I encountered no other fit issues at all. Even the firewall/cab/engine hood area with its multiple curves gave no problems whatever. To my knowledge, there has not been an injection molded, affordable kit of this halftrack type available before, and with the release of the artillery and Afrika Korps versions, a substantial gap in German vehicle types is filled with quality product.

My sincere thanks go to our distributors for supplying my review sample. This kit is highly recommended.