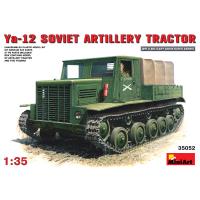 History: The YA-12 light artillery tractors were developed by NATI Designers and launched at the Yaroslavskiy Avtomobilniy Zavod YaAZ-Yaroslav Automobile Plant. In 1943, the United States supplied a large quantity of the U.S.-made GMC-4-71 four cylinder, two stroke, 110 horsepower engines under lend-lease contract. Production started in 1943, and within 12 months a total of 285 units were built. In 1945, production of YA-11s and 12s reached 1,270.

Items in the Box: The model is made from injection molded plastic, gray in color. The plans were made up of a book form, printed on both sides. Clear molded plastic windows, photo etch, and a decal sheet were supplied.

Construction: Started with the chassis buildup, running gear, engine and drive train. Next came the cab and its interior hardware, seats, dashboard, controls, and doors. The last unit assembled was the cargo carrier, seats, doors, canvas roof, and roof supports. I deviated on the roof slightly, using brass wire instead of the plastic supports supplied by the kit. The plastic supports are very fragile and broke easily. Lastly, the tracks (treads) were assembled to the chassis. Also used were the photo etched parts supplied. Care must be taken when assembling the photo etched parts so as not to lose the finely detailed parts. The final assembly was adding the cab roof and the cargo carrier.

Conclusion: The kit went together well. The kit buildup is for the more experienced modeler, as there are many tiny and fragile parts. I would like to thank IPMS, Mini Art, and Model Rectifier Corporation for allowing me to review and build this kit.