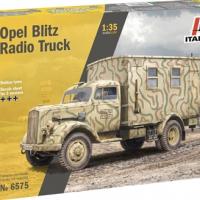 This appears to be a re-issue of an older kit. While the level of detail is okay, the details themselves are a bit soft. The parts layout and build sequence is simple and straight forward. Anyone with a kit or two experience should not have any troubles with the few issues I encountered.

The Opel Blitz was the "working mule" of the Wehrmacht during World War II. It was deployed on all fronts in multiple variations. Thanks to the sturdy frame, robust rigid axles with leaf springs and twin back wheels the Opel Blitz could carry a payload of over 3 tons. While the most popular version was a rear-wheel-drive 4x2, a 4x4 version was operated in both Russia and North Africa. A model with the rear wheels replaced with tracks also saw action in the Russian and European theaters.

The kit box contains two large sprues with most of the parts, one small sprue with the radio compartment floor and roof, one clear sprue of windows, and one with seven vinyl tires (my kit actually had all eight tires attached). Parts are in tan styrene plastic.

The instructions are a 13" x 38” fold-out printed on both sides and folded into 5 "pages". When unfolded completely the front includes a brief description of the vehicle, 3‑way views (driver’s side, front and rear) for each of the three decal options, and the final two assembly steps (10 and 11). The other side shows parts map for all sprues, suggested paint colors, and assembly steps 1 through 9.

Paint colors are for Italeri Acrylic Paint only. However, the color names for most are easily found in other manufacturers ranges.

Construction begins, as with most vehicles, with the frame and axles. Use care when gluing the front axle halves and capture the axle joints (parts 10A and 11A) and the front wheels can be steerable. There are some large ejector pins with flash on the mating surfaces of the axle (parts 12A and 13A) that require clean-up. Even with careful sanding the outer ends of the axles didn’t join (but came together enough to prevent the axle joints from coming out).

Step 2 is construction of the tire sets. Set B is the front, Set C is the rear inner and Set D is the outer rear. Unless you want to mask after construction, I suggest painting all the hubs (front and back) before assembling the wheels.

Step 3 attaches the wheels to the frame. Again, I recommend attaching the tie rod and towing pintle first. Then paint the frame before adding the wheels. A couple of notes on construction issues here. The tie rod (part 20A) attaches to the axle joints by passing above the leaf springs. On my model I didn’t need to heat flatten the pins on the axle joints, the tie rod just snapped onto them. The other, more frustrating issue, is the attachment of the wheels to the axles. The small rings (parts 21B and 23B) should fit into the lower recess in the wheel hubs (parts 14A and 16A), they don’t. One can glue them one as-is but then the wheels will not turn. With some care and effort these rings can be thinned to fit properly. This will allow the wheels to rotate. If you do this, then carefully glue the front hub (Part 22B) onto the wheel to avoid gluing the hub to the ring. Also take care when gluing the outer rear wheel to the inner rear wheel, as the same problem may occur.

In step 4 I assembled and painted the engine and fuel tank before attaching them to the painted frame (see image) I also attached the spare tire holder (Part 37B) with white glue so I could remove it after painting to add the spare tire.

Steps 5 and 6 are straight forward builds. I built the cab sides, rear, and floor, then painted them raw sienna. I painted the dashboard the same color then detail painted the instruments and buttons, before attaching it to the cab sides (see image). I masked the windows and interior and painted the cab sides and rear dark yellow.

I recommend painting all the small bits in step 6 while they are on the sprue and attaching them at the end of construction (to keep from breaking them). Note: I ran into a fit issue with the headlights similar to what I described above. The clear headlight lens doesn't fit fully into the recess in the headlight. So, when the headlight cover (Part 58A) is attached it did not sit flush with the headlight body (see images). I discovered this after attaching the clear lens so was unable to thin down its diameter.

Step 7 builds the underframe for the radio compartment floor. I painted the top and bottom of the wooden floor as seen in Photo 7.

Step 8 builds the radio compartment. This builds up as an empty box, but a search of the internet shows that there is an aftermarket interior available. I built the four walls around the floor, but didn’t attach them to it. Nor did I install the windows yet. This allowed me to paint the interior of the walls off white.

Step 9 builds the under-bed storage boxes. Step 10 builds the radio antennae and the extendable antennae mast. The cable reels on the extendable mast are well detailed, but could do with some wire wrapped around them as cabling. (I realized this after I had put everything together, and the space between them at that point was too small to be able to wrap them.) This step also attaches most of the details to the radio compartment exterior. After attaching the underbed storage boxes to the floor bottom, I masked off the wooden floor portions. I attached all but the ladders, antennae, and mast to the radio compartment box, before painting the radio compartment exterior dark yellow.

Before final assembly I painted the olive-green camouflage on the cab and radio compartment after masking the windows (see image).

Final assembly (Step 11) consisted of attaching the cab and radio compartment to the frame, as well as adding the small bits from Step 6 and the radio and antennae mast. As shown in the instructions the antenna attaches to the exterior wall with a flat side of the triangle facing out. I struggled trying to get it to stay that way while I attached the bracket (Part 111A). I finally gave up and placed the flat side against the exterior and attached Part 111A. Attaching Part 111A was a struggle as it squeezed the antennae arms. I'm not sure that what resulted is because of this change, though I doubt it as the antennae triangle is equal on all sides. I ended up gluing the inside pin on Part 111A, holding it in place with cross-open tweezers, letting it set-up for 24-hours (±), then gluing the outer pin, also held in place with the cross-opening tweezers.

There are three paint/decal options. One is for an overall Panzer Gray vehicle from the 11th Panzer Division, XXXXVIIIth PanzerKorps, PanzerGruppe I (Von Kleist), Ukraine June 1941. The other two versions have a dark yellow (Dunkel Gelb) base. One with olive green and red-brown squiggles belonging to the 116th Panzer Division, Stab Abteilung I, Panzer Regiment 16, in Normandy in July 1944. The other has only olive-green squiggles and belonged to Kampfgeschwader 3, Signal Staff Platoon, VIIth FliegerKorps, in Southern Russia during 1942. This was the option I chose.

I started this kit as I do all my builds. Washing the sprues in warm water with dish detergent and scrubbing the parts with an old toothbrush. I then primed the parts while still on the sprues with Krylon ColorMaxx Gray Primer and Paint.

The engine, exhaust manifold, fuel tank, and drive shaft are all called out as flat gun metal. For some variety I painted the engine and exhaust manifold Model Master Enamel Black Metallic (2713) and dry brushed it with Tamiya Gun Metal. The fuel tank and drive shaft were painted Tamiya Gun Metal (X-10). While the belts and fan are called out as flat black, I painted the fan and belt pulleys Black Metallic and the belts Tamiya Flat Black (XF-1). The exhaust pipe is called out as Flat Rust. I painted it overall Model Master Acryl Rust (4675).

The wooden parts of the radio compartment floor were painted Tamiya Dark Yellow from a spray can (TS-3). After drying I applied an uneven, light coating of Burnt Umber oil paint. Allow this to dry for 15 to minutes then wipe off in the direction of the wood grain. You don’t want to wipe it off completely, just enough to make streaks to simulate wood grain. Allow the oil paints to dry for a couple of days between applications. I repeated the same coat-streaking wipe-dry process with Burnt Sienna and finally Yellow Ochre oil paints.

Although not called out the empty interior is visible through the large windows. One could paint the radio compartment interior walls flat black to help hide the emptiness. Or you can, as I did, paint them interior white, in my case (Mission Models Elfinbein [German interior white]).

I painted the tool handles (shovel, axe, and pick) the same way as I did the radio compartment floor. The tool heads were all painted Model Master Enamel Steel (1780). The ladder color is not called out in the instructions, but is shown as flat wood in the 3‑way views. Also not called out in the instructions but shown in the 3-ways is the tail lights. I painted the lower left and right lights Tamiya Flat Red (XF-7). The upper left light is molded as a split light. I painted the top Tamiya Yellow (XF-3) and bottom Flat Red. All three lights were given a drop of Clear Gloss Coat (Mission Models MMP-006).

I painted the three major assemblies (frame and axles, cab, and radio compartment) with AK RC060 Dark Yellow thinned 2 parts paint to 1 part AK thinner. Thinned paint was applied using an Aztec 401 airbrush, black tip (0.40 High flow acrylic), set at 20 lbs. pressure. The olive green (AK RC 047 Olive Green) was thinned about 50/50 and applied with a Grex Tritium with a 0.20 tip, and air pressure around 10 psi to get a fine line. Photos 9 through 13 are different views of the completed an assembled model.

Photo 14 shows the “extensive” decal set. I used the Red and Blue MicroSol/MicroSet products to apply the decals without any problems. Decals were applied over a Humbrol Enamel Gloss Varnish (35). This was applied only to the areas that were to receive a decal using cut-outs in a piece of paper as a mask. Once dry, I gave the entire vehicle a coat of Humbrol Varnish Flat (49) to seal the decals and prepare the surfaces for future weathering.

As noted at the start of this review, this kit appears to be a re-issue of an older kit. This is supported by the heavy mold seam lines, flash, and "soft" details. While the kit itself may not be an award winner, it does supply a pretty complete starting point for a detailing effort using an after-market radio compartment interior.

I would like to thank Italeri (MRC) for providing this kit for review, and to IPMS USA for giving me the opportunity to build it.