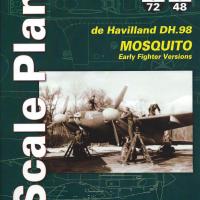 We thank Mushroom Model Publications for providing this book for review.

The De Havilland Mosquito was arguably the most versatile and successful twin-engine aircraft of World War II. It was originally designed as an unarmed bomber and reconnaissance aircraft. However, it excelled in other rolls that included day and night fighter, fighter-bomber, pathfinder, and high-speed military transport. It was constructed mainly of balsawood sandwiched between sheets of birch and covered with a fine woven cotton fabric and painted with a coat of silver dope. Its two Rolls-Royce Merlin engines gave it a maximum speed in the 380 mph range. Its beauty and war record has made it one of the most popular RAF aircraft of World War II.

Its popularity is reflected in the modeling world with a number of companies selling Mosquito kits. To help us achieve accurate detailing of this magnificent aircraft, Mushroom Model Publications has released their Scale Plans book covering the Mosquito in 1/72 and 1/48 scales. There are ten fold-out pages of line drawings. These drawings depict left, right, top, bottom, and front views. There are a series of cross-section views of the fuselage in both 1/72 and 1/48 scales. Also in both scales is a typical detail side view of the engine nacelle with supplemental cross sectional views. All drawings are precise and very detailed.

The 1/72 scale drawings are on pages 1-3. Pages 4-10 depict the 1/48 scale drawings. Variants detailed in both scales include F./N.F. Mk II, N.F. Mk II, three F.B. Mk VIs equipped with different radar gear, and the T. Mk III. There are no color pictures, drawings or narrative except captions identifying the variants. Even so, the drawings thoroughly detail panel lines and rivet patterns around and on the nacelles, inspection panels, and bomb bay lines.

With the help of this book the modeler can ensure the Mosquito kit he is building is correctly molded. Any panel lines removed during the build can be referenced here and correctly replaced. This is an excellent reference book for verifying the details found on your next Mosquito build.

Thanks again to Mushroom Model Publications for supplying this book and to IPMS/USA for allowing me to review it.