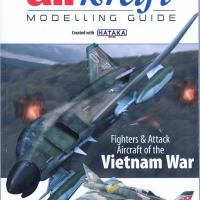 I really enjoy using the aircraft specific titles that Sam Publications puts out because of the amount of research, detail, and sections that are aimed at the model builder. I had been wondering about the Hataka paint line and how they compare to other paints. When I saw that this new series was done with HobbyZone and Hataka paints and that it had the same great look as other Sam Publications books. I just had to have it.

This first book of the series focuses on the aircraft of the Vietnam War, specifically the fighters and attack aircraft.

The Aircraft Modeling Guide is divided into 21 sections. They are:

I did like the Introduction on the Vietnam air war because it was informative and it also got your creative juices flowing. I just read the Intro and I really wanted to start working on a model. The aircraft modeling sections show the use of various brands of kits and scales. They also reference after market parts and a lot of different modeling techniques. This book is a wealth of modeling knowledge using up close color photos, I believe this book is a must have especially if you are interested in Vietnam era aircraft, I can’t wait to see what guide 2 is on.

Thanks to Sam Publications for making this book available for review and to IPMS USA for letting me review it.