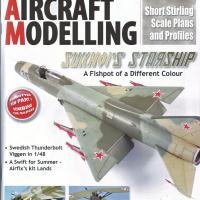 As Gary Hatcher states in the editorial, the dust is settling from the transition in editors and they are striking a balance between modelling, reference and history with modelling having the lead. This edition is chocked full of detailed articles on all types of planes.

The lead article is a test shot build of IBG's RWD 8 PWS by Karl Robinson. The final results are great and as this is their first aircraft, Polish manufacturer IBG comes out strong with this kit and bodes well for the future. Karl shows off his rigging skill as well.

Richard Mason previews Revell of Germany's 1/72 C-54 Skymaster with shots of the sprue and a history of the plane itself. The kit has a full interior and it builds similar to the RoG C-17. The kit looks great and I can't wait to see it show on American shelves.

Kinetic's new Mirage IIIE in 1/48th scale is built by Rick Greenwood. Mr. Greenwood details building the cockpit, the wings and also the options with the kit including the dropped flaps and the all of the weapon options. The finished kit looks great and the decal options are fantastic.

A double build of Hasegawa 1/72nd N1K1 Kyofu is done by Mark Taylor with one kit being the early prototype and one an active plane. One kit has a detailed cockpit and the other is detailed by leftovers and scratch building. Then results are impressive for a 30 year old kit.

Andy McCabe goes to a brand new kit, Academy's 1/48th F-4J Phantom. The kit is built out of the box except for replacing the ejection seats with Quickboost's alternatives. The rest of the build is OOB and looks wonderful in the Jolly Rogers markings.

Colin Pickett builds a very new and wonderful kit in Tarangus' JA 37 Viggen. The review describes the excellent research involved and how the kits builds. Mr. Pickett uses the Neomega cockpit (which was meant for the old ESCI kit). The result is impressive. This is also followed by a well photographed Viggen walk around.

Brian Wakeman builds Trumpeters new Su-9 and it is stunning. He adds a Eduard ZOOM set to the cockpit to bring up the detail and the rest of the build is OOB. He shows no use of filler and the final result of a Russian Su-9 in camouflage is as good as advertised.

Italeri's 1/72 Stirling A. Mk.IV, LK171 by Tony O'Toole is given the royal treatment, not with aftermarket, but with an excellent kit and great painting and weathering. This is also the subject of the aircraft profiles with three pages of side profiles as well as 1/72 scale drawings