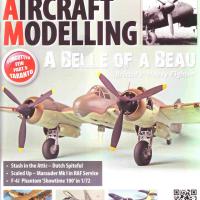 Scale Aircraft Modelling's November 2015 issue comes to us with a cover featuring a nicely framed picture of a Beaufighter and promises scale plans and profiles as well as other articles. Inside, it delivers as promised or even more.

Tony Grand leads off the builds with Magna Models 1/72 Seamew kit. A resin model of an unusual plane and Mr. Grand shows how to polish it up by reinforcing parts, fixing flaws and showing how nice the kit can look with some attention and effort.

A real highlight for me was Francesco Pigoli’s build of Revell’s 1/72 F-22 Raptor. Mr. Pigoli used Eduard’s Raptor interior and a lot of scratchbuilding skills to detail wheel and armament wells, intake FOD guards and more. There are many more fixes and the end result with a great paint scheme is phenomenal.

Rick Greenwood builds Academy’s 1/72 release of the F-4J in Show Time 100 markings. Mr. Greenwood starts off showing how the kit could be a quick build of the precolored parts and how it works well. He then disassembles the kit and works his way through several issues including difficult decals to produce a wonderful looking representation of Driscoll and Cunningham’s plane.

Revell’s 1974 kit of the 1/32 scale Beaufighter is given the kings treatment by Andy McCabe including a scratchbuilt cockpit and full interior. His work is jaw dropping and he also uses Vectors beautiful engines with additional detail to make a truly outstanding finished model all of which is well detailed in the text.

Following up on the Beaufighter theme, the Aircraft in Profile article by Michael Hase has 18 profiles, many actual pictures and 1/72 plan view drawings of the Beaufighter with all the profiles in color.

To finish up the articles is something unique. Andreas Hadjigeorgiou builds a snow blower but not any old snow blower. It is a conversion of Trumpeters 1/32 MiG-15bis, Trumpeters 1/35 German low sided railway gondola and some scratchbuilding to create a jet engine snow blower for clearing railroad tracks. Awewsome

On top of all that, there is the usual round up of new releases, announcements and modeling news. Some great, great stuff.