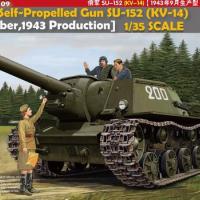 The Red Army entered WWII with most of its heavy artillery drawn by horses, making its movement slow and vulnerable to attack. The KV-2 assault gun was built to address the need for mobile artillery, but it was unsatisfactory as a fighting vehicle, mainly because of its large and overweight turret. It was therefore decided to replace the KV-2 with a new vehicle based on the KV-1S chassis. But instead of a turret, the 152mm ML-20S gun-howitzer would be mounted in a low-profile casemate. Several designs were put forward, but the KV-14 showed most promise and was further developed into the SU-152 by February, 1943. This self-propelled gun weighed 45.5 tons and had armor up to 75mm thick; powered by a 600bhp V-2k diesel engine, it had a top speed of 43km/h. It was built at the Chelyabinskiy Kirovsky factory until replaced in production by the ISU-152 in December, 1943. Though designed as an assault gun, it gained a reputation as a "Tiger Killer", as the blast of the 152mm shell could blow the turret clean off the German tank!

Upon opening the box, you will find 11 spruces in individual bags, 1 clear sprue, 2 bags of individual track links, 1 bag of pins for the individual track links, the lower hull section, a decal sheet, a PE fret, a track assembly jig, two pieces of copper wire for the tow cables, a picture of the box art, a picture of Neil Stokes book KV technical History & Variants, and the instruction booklet that has 34 steps and a color section showing five different vehicles to depict.

The build starts off with the lower hull and suspension, as well as the road wheels. These parts are very well molded with excellent detail and little-to-no clean up. Next is the engine block and a basic interior, in case you want to model the hatches open. The engine has nice detail, but I choose not to use it or the interior parts, as I modeled this vehicle with all the hatches closed. More stuff for the parts box.

Next come the gun and upper superstructure. Again, the detail is excellent and clean up is little-to-none. The gun is two pieces – the main gun and the muzzle break. Nice touch, as there are no mold lines to sand. Next come the fenders. This is where I had a problem. The left side fender had a manufacturing problem. On the rear side on the fender, there must have been a bubble in the mold when it was poured, because part of the fender was missing some plastic. See photos attached. I fixed the problem with some plastic card stock and a little sanding. The extra fuel drums go together in three parts, which eliminates mold lines, nice. The tow cable is made up of the plastic kit ends and copper wire that is supplied in the kit. Just cut to length and glue up.

The final part of the build is the tracks. This is where I spent the most time on this model. The tracks are individual link and go together with a pin on each side. There is some clean up here, not as in ejections pin marks (none at all), but after cutting the track from the sprues the cut off points will need to be sanded. There is a track jig included with the kit; I used it and must say I found it very helpful. The pins come spaced just right, so if you cut a line of them off of the sprue, they go perfectly into the tracks on the jig. Do NOT use liquid cement here to attach the pins. I did this at first and found that even thought I only used a little it still flowed into the track, causing it to glue together. Use CA glue instead by applying a little to each pin before siding it in. This will give you a nice set of workable tracks.

I painted the model with Tamiya paints. First a primer coat, then a black pre-shading coat on all the raised lines. Then the vehicle color. I then applied the kit decals, which lay down nicely. You have a choice here as to which vehicle decals to use. I choose to represent a vehicle on the Eastern front. I sealed the model with a clear coat, let it dry, then weathered the model with AK Interactive pigments and washes.

I highly recommend this kit to all modelers. Armor modelers are going to love this kit.