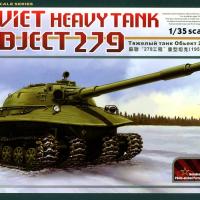 Object 279 was a Soviet prototype tank designed in 1959 to be capable of operating on a nuclear-biological-chemical battlefield and even survive the blast wave from a nuclear weapon (from a distance, anyway). The tank had a bowl-shaped body to channel blast energy around itself. The vehicle carried a 130mm main gun capable of firing discarding sabot shells that could penetrate over 400mm of armor. The tank’s own armor was up to 319mm thick. The tank had four tracks to assist it in going over exceedingly rough terrain. In spite of its advantages, the tank was never put into production due to gearbox reliability issues and its inability to cross some bridges and move in swampy areas, due to its weight.

The kit comes with four parts trees, three parts trees for the individual track links, the upper and lower hull sections, a PE fret, a small length of copper wire for the tow cables, and the instruction booklet. Also, there is a print of the box art photo.

Construction starts with the four running gear assemblies and the individual tracks. On the drive sprockets, the aligning pins need to be cut off as they do not line up. There are several mistakes in the instruction throughout the booklet with either mismarked parts numbers or missing parts in the instructions altogether – for example, the tow cable assembly/placement on the model is not shown until the final assembly section 15, where it magically appears on the model.

With the completion of the four individual link track sections, I found this assembly to be one of the real joys after thinking it was going to be a real bear. I used my homemade track jig (a piece of plywood with horizontal and vertical straight edges) to glue the track runs. 82 links will give just the right amount of track sag for each run.

Construction moves on to the rest of the hull and the turret. The 130mm gun comes in two halves and there is some filling and sanding work to be done here, so be careful not to remove any detail. The hatches can be assembled open or closed, but there is no interior with this kit, so I choose to model the vehicle with all hatches closed.

I primed the model with Tamiya spray can grey primer. Then I painted it with Tamiya paints. The tracks were painted on the model with AK Interactive paints. Weathering was done light-handed as this was the only vehicle built and it was only used for testing, so there was no battle damage or long-term exposure to the weather. Some light rust streaks and rain marks along with some light dusting and dirt were added.

I found this kit to go together rather well and would recommend it to any modeler.

I would like to thank Panda Hobbies for supplying the kit for review and IPMS USA for allowing me the chance to review it.

Treads - all four of 'em