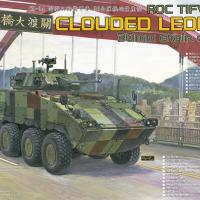 The name ‘clouded leopard’ is taken from a beautiful medium-sized wild cat that is found throughout much of Southeastern Asia and pictured below to satisfy your animal interest for this beautiful cat.

This kit is a Taiwan Infantry Fighting Vehicle (TIFV) and appears to closely resemble the Stryker vehicles I have seen at Ft. Lewis. That’s where the apparent similarity ends, as the basic CM-32 vehicle series is new design built in Taiwan, the Republic of China.

This Taiwanese vehicle is an 8 wheeled armored vehicle with the four front wheels able to articulate together, allowing for approximately a 33-foot turning radius. The CM-32 series is currently at roughly 600 units and is estimated to include almost 1,400 in total operational service. The CM-34 (covered in this review) mounts a long barreled 30 mm chain gun in its dedicated turret. There are approximately 284 CM-34 versions currently in use by the Taiwanese army and another 21 in use by the Republic of China Military Police.

The kit contains nine finely detailed sprue trees, with a separate main body section, a clear tree, some poly caps, a separate aluminum gun barrel, two frets of photo-etch, a small decal sheet, a bag of eight rubber tires, and instruction sheet of 33 pages. There are several pieces included which are intended for prior kits; this is especially evident in the ‘C’ clear piece. I appreciate AFV Club’s use of olive colored plastic for their injection molding of this kit. Far too often I open kits molded in tan, white, purple or black plastic which will always require one or two coats of priming to arrive at a workable and paintable surface color.

Aside from the three existing AFV Club kits currently in production, you will also notice that ScaleMates shows a lineage link to the Freedom Model Kits line of four kits. Presumably this indicates that this kits all manufactured by the same parent company which appears to be Hobby Fan.

The remaining 11 pages address the assembly of the main armored deck, pieces of applique armor plates, the 30 mm gun turret, and bustle

Also unique to the CM-34 is a dedicated turret containing the 30 mm chain gun and the Mk 44 Bushmaster cannon. This weapon can fire out to over 3,000 yards (9,800 feet) at effective rate of over 100-200 rounds per minute. I have witnessed several test firings of this weapons system and can attest to the tremendous blurring sound of the weapons. This is the same basic weapon used throughout the military today aboard many surface ships, gunships, and awesome armored vehicles.

The painting of this model becomes a bit tricky as the box art displays a digital camouflage scheme and where I choose to use my ‘artistic license’. There are four colors called out in the instruction drawings, including “Leather Brown (FS 30051), Bronze Green (FS 34094), Tar Black (FS 37030) and Russian Green (1).”

Then for the next major tasks (1) to very carefully analyze the ‘digital’ camouflage scheme. (2) I did this by making a series of enlarged copies of pages 21-23. (3) created the masking as shown on the patterns. (4) masked off the four colors (laying down the Russian Green first, followed by the Leather Brown, Bronze Green and finally Tar Black. (5) be prepared with a lot of patience and Tamiya masking tape. (6) start to lay down the actual masking pattern (going from the lightest to darkest colors). It’s a bit mind numbing, but the resulting paint scheme is very pleasing. When analyzing the turret paint scheme, you will probably notice that the drawings on page 21 do not match that shown on pages 22 and 23 (which show the turret in a camouflage pattern, which I did not choose to follow).

I primed the model with Mig One Shot Green primer (# A-Mig-2028). It’s the Russian Green that caused me some consternation and chose to use Mission Models Russian Green Modern (MMP-032) as the initial base color, followed by Mission’s Japanese Propeller Brown (MMP-119), US Army Olive Drab Faded 2 (MMP-021) and NATO Black (MMP-035). These colors basically permitted me to create a more subdued camouflaged paint scheme. The turret is painted in an overall olive drab color (see the note above).

In retrospect I should possibly have used Russian WWII (MMP-085) which yellowish green color. The fact is that once you have settled on your color choices this scheme is complicated to say the least and one that is not easily over sprayed once painted. If you can find the AFV Club masking set TW 60019, it will provide you with an alternate approach to this challenging paint scheme. I have also attached two of the AFV Club images to illustrate their color choices.

There is another alternative color scheme using only one basic olive drab color, for which there are several online photos available. This would appear to be a much simpler and faster painting scheme. But we’re modelers and we often go for the more challenging approach…..right?

I over spayed the entire model with a thinned layer of Dullcoat and dry brushed with my favorite Naples Yellow Light, # 426.

Having done several AFV Club models I anticipated a more challenging build and was happily surprised as I found this kit built up quite quickly and easily.

I followed the instructions with a few exceptions (i.e. antennae, small tools and side storage shelf racks) and found they provided an orderly process.

I strongly recommend this kit, with the with the painting and masking challenges noted above.

My thanks to AFV Club and IPMS-USA for the opportunity to review this kit.

AFV Club and Freedom Models are not the same company.  Hobby Fan is the only link available as AFV Club does not have a web site. We get the kits from their company president