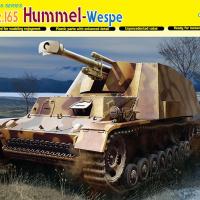 Dragon Models has released a new boxing of their Hummel self-propelled artillery. This is the Hummel Wespe, with the 10.5 cm gun (instead of the typical 15 cm). The smaller gun meant extra rounds could be carried in the vehicle.

This kit is based on the excellent Dragon Hummel kit, with new sprues for the smaller gun, a modified fighting compartment, and new racks for the extra ammo.

The hull and running gear is based on the Panzer IV, with an excellent level of detail. The road wheels are of the rubber rim style. I was pleasantly surprised to see all the rivets, access panels, and overall surface detail of the hull and front armor pieces. It does look “like the part”. The tracks are of the DS kind and have good detail as well.

The fighting compartment has very nice surface detail, and while some aftermarket parts are likely to be made for it, I doubt they will be required. Multiple racks, boxes, a fire extinguisher (at least I think that is what it is), all kind of fittings, plus braces/brackets, make it very busy. All of this detail has raised detail that would take dry-brushing really well and will help to show detail.

The gun is a kit on its own merit, with a detailed breech, periscopes, sights, and recoil absorbers. I think it would be possible to assemble it and still be able to change elevation and azimuth after assembled.

Three finishing options are provided: one in yellow and red-brown, the other two in typical late-war tri-color camouflage. No unit details are provided.

The instructions are very busy. I mean, very busy. It lists a total of 21 steps, but several steps have multiple sub-steps.

This kit has an outstanding level of detail. There are over 450 parts to this kit, so don’t expect it to be a “weekender”. I would recommend this kit to the average to experience modeler.

I would like to thank Dragon Models USA and IPMS/USA for the review sample.

Picture of one of the sprues.

Close-up view of the sprue and the clean parts and small attachment points.

Another sprue of nicely detailed parts.