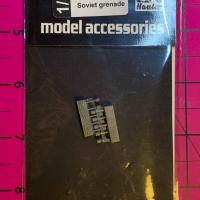 Hauler/Brengun was founded in 1999 and produces scale plastic kits, resin kits and accessories, photo-etched details for kits and other accessories.

The Soviet RGD-33 (Ruchnaya Granata Djakonova obraztsa 33) Hand Grenade was designed by Russian engineer Mikhail G. Dyakonov in 1933 to replace the aging Model 1914 grenade. Complicated to use and manufacture, the RG-42 was developed to replace it in 1942. The RGD-33 consisted of three separate parts that were kept separate until ready for use: the warhead, the handle, and the fuse. They were only assembled and distributed prior to combat and even then, the fuse was kept in a separate pouch wrapped in wax paper. The RGD-33 was not armed until the fuse was inserted, just before it was thrown. There is a sliding thumb band on the handle with a red dot for armed and a white dot for safe. Sliding this thumb band from white to red would arm the grenade. A strong throw was required to activate the grenade. Without the additional cross-hatched jacket, fragmentation was about 15 meters in radius. Adding the cross-hatched jacket, fragmentation doubled to 30 meters in radius. Total production was more than 50 million RGD-33 grenades.

This set is in Hauler’s standard re-sealable plastic pouch that includes a card header tagged with the part number. You get ten grenades on two sprues. There is a thin film of resin on the backside of the handles of the grenades that supports the individual grenades that will need to be cleaned. The result of this film is that the handle is flat on that side. I don’t know an effective way to address this, but when displaying the grenade, you may want to keep this side down. All ten grenades come with the additional cross-hatched jacket, so there is no option for the smooth grenade. What you may want to add is a slot down this jacket opposite the latch that holds the jacket on. This can be accomplished with a photo-etched very fine saw. The latch is present (faintly) right next to a small hole on the cross-hatched jacket. The RGD-33 had a pin sticking up from the shell that inserted into this hole, with the latch locking it on. The top of the grenade does show a representation of the pivoting cover that secures the fuse. There are a few tiny pin holes apparent that may need attending to. Be careful not to fill in the small hole just mentioned for the cross-hatched jacket. There are no decals, although given the extremely small size they would be, they would have been difficult to apply.

I primed the grenades while they were still on their resin block with Tamiya TS-3 Dark Yellow. I then used Vallejo Green Wash (73.205) until I was satisfied with the overall color. Then it’s off to your references. I’ve seen the thumb slide painted the same color as everything else (green), left natural metal (I used Vallejo Pale Burnt Metal 77.704), and painted black (I used Vallejo German Grey, 70.995). You can add in a tiny dot of white (I used Vallejo 70.820 Off-white) just to the right of the thumb switch to show it in safe mode. To show it armed, a tiny red dot to the left of the thumb switch. Some grenades had the steel retainer to secure the cross-hatched jacket in natural metal, others were green. I used Tamiya’s Panel Line Accent Color (Pink-Brown, then, Brown, then Dark Brown) for washes.

These are small at 1/35 scale, given that the original was only 7.5” long. These should look great with figures or any Soviet armor diorama. I have just placed them on the deck of a 1/35 Soviet T-50 to give an idea of the size. My thanks to Hauler-Brengun and IPMS/USA for the chance to review this great set.