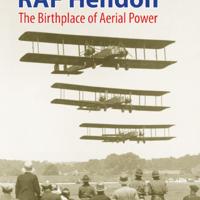 Having spent some pleasurable visits to both the RAF Hendon and RAF Cosford museums, my curiosity was piqued by the title of this book and I was anxious to review it. When I received it and saw “Royal Air Force Museum” on the soft cover as the official “sponsor,” I anticipated coverage of the first, if not both museums.

Nope. In fact, the author states in the second paragraph of his introduction that there’s not enough space in the publication to cover the museum in depth---instead, the book is a concise history of RAF Hendon’s founding, rise, and utilization.

The airfield started as the launching point for a balloon on 20 August, 1862, carrying the pilot and four passengers. One of them, John Glashier, had previously flown with the balloon’s pilot, Henry Coxwell, many times on meteorological research flights. The flight didn’t set any records and, in fact, was somewhat of a disappointment, as the balloon came down not far from its takeoff point due to light winds aloft.

British aviation pioneer Claude Grahame-White laid the foundation for the development of the property, which came to be known as “The London Aerodrome” – over the years, it hosted nine Air Displays in the years leading up to the First World War.

A wealth of aircraft (and automobile) manufacturers opened businesses at the Aerodrome and continued to turn out machines until the outbreak of World War One, when the field was requisitioned for pilot training and the air defense of London. After cessation of hostilities, the field became an RAF station in 1927.

When World War Two broke out, RAF Hendon was, among other things, a training station for Blenheims, and became a Fighter Command station, home to 504 Squadron’s Hurricanes at the height of the Battle of Britain.

Post-war, RAF Hendon enjoyed guest tenants from the U.S. Navy, RAF Transport Command, and even 617 Squadron Gliding School at one time or another until its airfield closure in May, 1966, and the shipping out of all military personnel in 1967.

The last scheduled landing before the airfield itself was redeveloped into housing and other purposes was a Blackburn Beverly, which became a gate guard. In my trips to the RAF Museum, I never saw this monster, so I assume it’s been moved to another location.

But Hendon wasn’t dead just yet. After the official closure of the airfield, an Air Force C-54 made an emergency landing there following an inflight fire warning light, and subsequently a West German Air Force Noratlas mistook its runways for Northolt’s. A Piper Cherokee made an emergency landing at Hendon in December when the pilot became lost in foul weather, and another one landed the next day to collect the pilot and the first plane. Hendon was also one shooting location for the move The Dirty Dozen.

This book is extremely well-researched, very well-written, and is heavy on the story of RAF Hendon in the years leading up to World War One. I would’ve enjoyed it even more if I were more familiar with the geography of the area, as many listed location names don’t always show up on modern London maps, having been changed over the years.

My thanks to IPMS/USA and to Specialty Press for the opportunity to review this fine book.