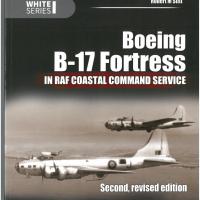 This softbound book is 224 pages and includes a wealth of information for the aircraft enthusiast or model builder.

The back cover reads “Rejected as a bomber by the RAF, the B-17 was used extensively as a long-range maritime reconnaissance aircraft by Coastal Command. This book tells the fascination story of these operations, a vital but often overlooked part of the fight against the U-Boats. All the aircraft involved are listed, and the tedious but essential work of their crews described, including some epic encounters with enemy submarines. Fully illustrated with many wartime photographs and scale plans of the airframe modifications.” This is a great summary of what this fantastic book is all about.

This second revised edition includes more information and some minor corrections from the first printing. Included with this volume are both the original introduction and forward, as well as one for this second edition. Per the author’s introduction to this second edition: there are some minor corrections, as well as new information on color and camouflage schemes, greater lend-lease background information, over 80 new photographs, diagrams, tables and document extracts as well as updated scale drawings. The author notes that both the first edition and the amendments to the first edition which were printed online should be considered out of date as their content has been revised and is included with this printing.

I was very impressed with the research and time that went into the publication. I’d say without any reservation, that this would be the source for the modeler if you were looking for more information for the RAF Coastal Command B-17’s. The text is very readable and keeps the reader interested and engaged. The text is backed up with hundreds of excellent photographs telling the story of these aircraft. While the majority are black and white, there are some very nice color photos included as well. In addition, there are scale plans and full color profiles of various aircraft.

There are also five pages which list the author’s primary and secondary sources, as well as acknowledgements if the reader wishes to do their own investigations. I don’t think that you would need to, as in my opinion – the book itself covers just about everything one would want to know.

Besides the photos and profiles; Of particular interest to us in the modelling community are the tables at the back of the book. “Appendix K: Camouflage and ASV Radar Configurations on Delivery to United Kingdom Fortress IIA and II” This also includes known delivery paint/color schemes. “Appendix L: Anti-U-Boat Squadron Allocations and Code Letters – July 1942 to April 1945”

This book is simply brilliant in the amount of information it passes along to the reader. If you’re interested at all in aviation or the B-17 in general – you really must add this title to your library.

There are a great number of non-standard B-17 color schemes included here if you are looking for something different for your next Flying Fortress build.

I highly recommend this book.

Thank you to Casemate Publishers for the review sample and IPMS/USA for the opportunity to review the publication.