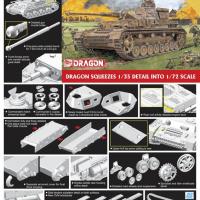 Dragon advertises that they squeeze 1/35th detail into 1/72nd scale – and I can testify that they do indeed! The Pz IV F2 was the first of the series to mount a long 75mm gun. Originally designed to carry the short 75mm in an infantry support role, the gun versus armor race in early WWII found the Germans up-gunning the Pz IV to meet the threat posed by heavier Allied tanks. The first Pz IV F2’s, called Mark IV Specials by the British, appeared in March 1942.

The first thing one notices upon spreading out the parts is a new system for doing the road wheels. One of the tasks which makes me not want to do small scale German armor is painting the road wheels. I will never again feel trepidation! The tires come as double sets with separate wheels, allowing for painting on the sprues and no touch up needed due to the clever attachment points on the rear of both – they don’t show! I was so impressed by this system, which worked like a dream, that I almost forgot to build the rest of the tank…

There are 11 sprues of plastic holding 145 parts, plus a separate hull and hull top, one photoetch fret with 4 parts, and two vinyl or vinyl-like tracks. All of these will be used, with the exception of optional configurations for the hull front spare track hangar, commander’s hatch, and two of the photoetch pieces which have plastic counterparts.

Construction begins with Step 1, drive sprockets and idler wheels, which come in two pieces each, and assembly of the road wheels. I sprayed the tires and wheels separately, set them aside to dry. Then I did the sprockets and wheels. In Step 2, six pieces complete the hull, and the front spare track hangar should go on now.

The hull top is Step 4, and everything is straightforward save for the single most challenging part of the build – the hinge arrangements for the drivers’ side vision ports. They appear complete and very accurate, but are very difficult to assemble in this scale. I was able to pose one open, but as there is no interior in the kit, I removed the interior parts and mounted the vision port closed. Some tools are molded on the hull and there are others to be attached. I attached everything here prior to painting. The instructions are crystal clear and there were no issues.

Step 5 attaches the fenders to the hull top and the detail is fantastic – on both sides, even the fender bottoms have detail! Tools are also added here with no issues. The transmission cover attaches here as well.

Step 6 is the main gun, and there are 12 pieces to the gun and external mantlet. A bit complicated, and a bit of a disappointment as the tube is a single piece plastic affair with a seam. However, it is a single piece, and the distinctive feature of this mark, the globular muzzle brake, is well done.

Step 7 was bit tricky – the three subassemblies which make up the turret. The commander’s hatch is straightforward, and so are the two side hatches. The same hinge arrangement as for the side vision ports is available for the turret vision ports, and again, I found them difficult to get attached in this scale. After assuring myself they could be done, I posed both ports closed here as well, but this is an interesting option in this scale for the enterprising 1/72 diorama builder. Final assembly of the turret required some care to close all the seams, but they do close. The hull storage basket is not quite the right shape, and the bolted strips attaching the basket to the turret on each side at the top broke as I reshaped the basket to a better fit. I meant to replace this with lead strip, but in the event, didn’t get it done and didn’t notice until I was weathering. It’s not a difficult fix, and I may even get to it before Christmas.

Step 8 is final assembly. First I assembled the one-piece tracks. I have had success using glue with these tracks before, but chose to use the heated knife method to make each run this time. It is a sturdier assembly, in my opinion. Real Panzer IV tracks showed very little sag, but it is very difficult to get any with these tracks, they are so tight. I painted them Tamiya acrylic Hull red, and washed with burnt umber oils highlighting with graphite. When attaching them, the mounting lug for one of the idlers broke off, so I had to substitute a piece of paper clip heated and set into the plastic. Another shortcoming was revealed in that the mounting points for the first set of road wheels on each side are not secure enough to take the tension of the tracks. I had to remount both after the tracks were on, but you can’t really tell. If I build another, I will strengthen this join before the tracks go on.

The hull top and turret went on easily, and then it was time to choose a paint scheme. Dragon offers decals for 7 vehicles in different theaters: one France, one North Africa, and 5 Russian. You can paint this tank gray, gray/green, or the standard Panzer yellow. I have a weakness for the desert campaign, and so did the overall yellow, with markings for the 15th Pz in Tunisia. I used Modelmaster acrylic Panzer Yellow, and then highlighted with a lightened version of the same. A brush coating of Future and then came the decals, which responded well to solvent.

I used a black pencil (black colored pencil, not graphite!) to replicate chipped paint, and was pleased with the results. A little more practice on my part, and it will work well in this scale. Burnt umber oil washes were applied and a flat coat finished the model.

It should be possible to assemble an early G variant from this kit; this would require leaving off the side and turret vision ports and sourcing a double-baffled muzzle brake. I think it would make a convincing G; as there is documented evidence of mixed G hulls and F turrets, and vice-versa, there is quite a bit of modeling that can be done here.

I want to thank Dragon and IPMS/USA for a very pleasurable and convincing build, one that even a modeler with average skills like me can do well, and one which the exceptional modeler will find exceptional.

Finished model left side from top front
Previous Next