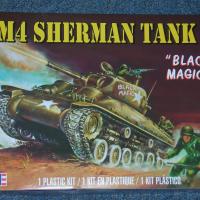 When I saw that this kit was available for review, I just had to do it. It was the first model I ever built on my own. My grandfather bought it for me and I built it at his kitchen table with a tube of Ambroid glue that got all over everything, but I loved it. The model, not the glue. That tank saw many a battle on my bedroom floor and in the back yard for that matter. Can’t remember how it met its fate, but I think it just plain wore out and fell apart. But all that’s neither here nor there, so on to the review.

First released in 1956 (!) this model was Revell’s first foray into the military vehicle area, to be followed by a T-34, M-56, a jeep, a 155mm Long Tom and high-speed towing vehicle and two sets of soldiers. Unfortunately, at the time, none of them had great sales and they disappeared from the Revell catalogue after a few years. However, the Sherman and M-56 have been re-released on several occasions, even once motorized, but never did particularly well.

Now, to get this out of the way, I will not discuss accuracy as this kit was not meant to be the be-all end-all replica of the Sherman. When complete, it generally resembles a Sherman on your shelf, but that’s about it. It’s a hodge-podge of Sherman characteristics put together including an engine deck that does not bear resemblance to any Sherman, but remember this kit was meant as a toy and a great one it was. It has just enough parts (93) to make it a real model but none of them are fiddly or complicated. The tracks have a good system for joining the ends, but may take some cleaning up as there was some flash that could have made the joint dubious. The drive sprocket is modified for the motorized release so it looks a little odd. As for the rest of the parts, they are cleanly molded, which is surprising given the age of the molds. The instructions are very complete and clear (something some of the newer manufacturers could learn from) and the small decal sheet is well done.

The kit is very easy to build as the fit was good with little flash to clean up. There were some mold seams, but really not that bad. I drilled out the main gun and MGs just to make them look a little better and I also textured the hull by stippling with liquid glue as the surface was really, really smooth and all Shermans, even welded ones, had some texture to the surface. The tracks are a bit too long, but that’s ok as the axels of the drive and idlers are not all that strong and if you had to stretch the tracks over them, the axels could not take much strain.

The kit comes with three figures, a commander and two infantry men. They are much better sculpted than the figures in Monogram kits of the time and paint up pretty well.

The decals went on very well. As I had done some texturing, I used the Kleer system of applying them and avoided any silvering. One of the decals is a pennant that goes on a stub of an antenna, which is odd, but adds a splash of color.

This is a great kit for the new modeler who is just moving up from snap kits. It’s just challenging enough, yet builds up easily. As I said, it’s not a great replica of a Sherman, but it does build up into a nice-looking model and would be good for a father son/daughter project.

Thanks to Revell and IPMS/USA for providing the sample for review and a chance to stroll down memory lane.