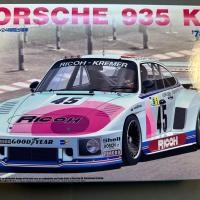 A presence on the racing scene from 1976 to 1981 when FIA rules changes finished their run, the Porsche 935 series of race cars won about a third of the all the races they entered. This car, a 935 K2 series fielded by the Porsche-Kremer racing team ran the 1978 Le Mans race finishing 25th. Kremer would go on to win Le Mans in 1979 with a 935 K3. These cars were powered by flat six 3 to 3.3 liter twin turbo charged engines producing over 700 hp. Based on the 911 body, numerous aerodynamic improvements made these cars serious contenders.

The Beemax kit is a reissue of a Platz kit. The parts are molded in black, white, clear and chrome. Masks are provided for the glass as are rubber tires and mesh for the rear wing vents. Two styles of wheels are provided as are the brake vent disks used by many 935s. Three decal sheets, detailed instructions and a color decal guide round out the kit. Quality of the parts are top notch as is the fit of the parts.

This is a curbside so you only get the bottom of the engine and a full suspension. The review kit included a “Detail Up” set that I will review separately. Assembly is straightforward and you’ll be ready for paint before you know it. Decals are provided for all the body parts so it's possible to paint it white (or leave it in white plastic) and produce a fully marked replica. The exceptions are the window framing, tail light lenses, recesses by the tail lights and the brake vent disks as these are not the right color out of the box. Vent screens are provided as injection parts and a small mesh panel cut to the template in the instructions.

The decals conform to most surfaces. I needed setting solution to lay the vent cut outs on the hood, brake vent disks and the front splitter trim. Specific decal issues include the splitter stripes done in layers that obscure the slots and bolts that mount it and the wheel brake vent baskets.

The vent baskets are painted black or dark grey and the gold spoke pattern is provided as a decal. These proved to be very difficult to align with raised spoke detail underneath and to conform over that detail without numerous passes of a knife and setting solution. Be very careful with setting solution. Micro Sol seemed to work the best and Solvaset was too hot.

Everything aligns beautifully and the body is easily mounted on the chassis. The photos you see include the aforementioned detail set parts including metal screens, turned parts and fabric seat belts. All of these are improvements on what's included in the base kit. You don’t need them to make a nice model.

In summary this kit is exactly what I’d expect from this manufacturer having done a few of them before. Basic painting and decaling skills will give you a model that looks like the picture on the box. A fun relatively simple build, highly recommended.

Thank You to Beemax for the sample of a striking little car model and to IPMS for again allowing me to share another build with all of you.