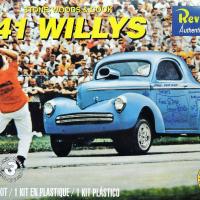 Cleanup on aisle six. That's what I kept thinking as I peeled away layer after layer of flash and mold seams from this kit. Michelangelo once said something like every block of stone has a masterpiece inside. It’s up to the sculptor to discover it. That's the way it is with this kit. Somewhere buried beneath all that flash is a nice kit.

This is a great Revell kit that once was a classic model that every car modeler needs to build. Dates on the sprues suggest this kit was first issued in 1982, and there have been several re-releases since then. The years have not been nice though, as the flash and worn moldings continue to grow, requiring lots of cleanup.

The kit includes 155 parts molded in white plastic plus chrome plated sprue, four vinyl tiles, and decal sheet. They underside of the interior has a copyright date of 1982. The chrome sprue is fairly good detail but is heavily chromed and has lots of flash on the parts. The vinyl tires have very nice detail with lettering on the sidewall. The tires do have sprue connection points on the tread and some minor flash.

The white molded plastic parts have good detail but lots of flash that will require clean up. The one piece for molded body also has lots of flash and an obvious mold same running the length of the car. The kit does have opening doors, hood, and trunk.

The engine parts have interesting detail for the internal components of the engine. The tops of the pistons are visible in the cylinder heads, the crankshaft is visible inside the engine block, and the cylinder heads have good detail for the spark plugs. However much of the detail has been lost due to the soft casting from the old molds and the large amounts of flash to be removed.

I decided to remove the plating from the chrome parts due to the large amount of cleanup required and to improve the fit of the parts. When the chrome plating was removed with Easy-Off Oven Cleaner it revealed nice detail. Once the flash was removed and the parts assembled I used Alclads Gloss Black Base and Chrome paint to achieve a nice chrome finish. The parts do have some rough spots in the molding. Removal of the chrome plating to clean up the parts is required for a nice fit, but does end up with a nice looking engine assembly.

Revell has nice detail in the chassis parts, but there is again lots of flash to clean up. I assembled the parts first and then painted the chassis with semi-gloss black as called out by the instructions. Careful assembly of the front steering linkage in step 5 will allow the front wheels to rotate, although the connection of part 29 to part 30 is tenuous due to the rough shape of the parts.

The remaining chassis goes together fairly well after cleanup of the parts. The nice detail in the chassis is revealed after removal of the flash and mold seems.

Step 9 starts the installation of the interior. I am using a two-tone blue and white scheme similar to the colors called out by the instructions. All of the interior pieces fit nicely and didn't seem to have as much flash is the chassis pieces. In step 9 the interior gets fastened to the chassis. The steering linkage, parts 85 and 86, are to be installed at this point, but gluing them in place will prevent rotation of the front wheels. Make sure to get the front wheels lined up prior to gluing this part.

Installation of the wheels and tires to the chassis is in step 10. I sanded the treads on the tires to get a worn appearance, which caused a bubble to appear in one of the slicks. The wheels have flash around all of the their openings which is difficult to remove and leaves an irregular appearance. Revell uses parts 36 and 46 on the interior of the wheels apparently as brake drums. The instructions show these parts recessed on the inside of the wheels but they actually project quite a bit. These parts do not fit very well to the rest of the wheel so I left them off. Revell uses a plastic rod for the rear axle, which will allow the rear wheels to turn. Revell shows some axel pins for attaching the front wheels but I could not figure out how they fit the axel hub. I didn't use them, but rather drilled holes in the hub and used a piece of styrene rod to attach the wheels.

Step 11 starts assembly of the body. Both doors, the hood, and the trunk can be assembled so that they are positionable. The hinges for the doors, parts 63R and L are huge clunky parts. I fastened the passenger door in the closed position, but will leave the driver’s door positionable.

In step 13 Revell shows installation of the body side molding on the doors. I don't know why Revell has molding these parts separately as they will be grossly out of scale when installed, particularly with the kits stock chrome plating. I decided not to install any of this body molding pieces, as I wanted to accentuate the smooth flowing lines of the body. Also in steps 12 & 13, large frames are shown for the windshield and rear windows. The frames are grossly out of scale and I didn’t use them, simply gluing the acetate windows to the inside of the body.

Did I mention there was a lot of cleanup? Once upon a time this was probably a great kit, and it can still be made into a nice model, but it takes a lot of work. The body is the best part of this kit, both in the clean lines of the Willys and the nice molding by Revell. The chassis & engine take the most work in cleaning up flash, but a patient, skilled modeler can make a nice kit.

Thanks to Revell for supporting the IPMS Review Program and supplying the review kit.