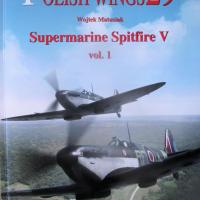 In 1939, after the defeat of the Polish Air force by the Germans and the Russians, a substantial number of trained and experienced Polish pilots and ground crews managed to escape to France and England. Eventually, they were formed into fighter squadrons attached to, but not specifically a part of, the British Royal Air Force. Most of the pilots were originally assigned to units flying the Hawker Hurricane, but in 1941, these units were re-equipped with Spitfire Mk. V fighters, the current version of this famous fighter. From 1942 until early 1945, these units used Mk. V Spitfires against the Luftwaffe, until they were eventually replaced by the Spitfire Mk. IX and American Mustangs. In total, about 800 Spitfire Mk. V’s were used by various Polish units, and they inflicted considerable losses against the Luftwaffe.

The book consists basically of an account of the Polish use of the Spitfire Mk. V, and is arranged by unit, starting with the 1st , 2nd, and 3rd Polish Wings, and followed by the individual squadrons within these units. An impressive selection of personal photographs has been included, along with contemporary photos of the particular aircraft, including details and pictures of the pilots and ground crews. Accounts of individual combats are included, along with photos of the “kill markings” painted on the sides of the individual Spitfires. There are even shots taken by Luftwaffe photographers of the wreckage of various Spitfires downed over German occupied territory, as they were being taken to scrap yards. I found it impressive to see photos of Spitfires that had crash landed, with the explanations that these aircraft were rebuilt and returned to service.

These books are primarily intended to provide a history of Polish participation in the air war, but they also include documentation that will be useful for modelers. Since RAF aircraft used camouflage patterns that didn’t change much during this time period, it apparently did not seem necessary for the authors to include top and bottom views of the aircraft, but the side profile drawings give a very good account of the specific markings carried by each individual fighter. Included in the book is a flyer advertising the Special Hobby kits of the Spitfire in 1/72 and 1/48 scale, so it should be possible for the serious modeler to build a model of any of the aircraft described in the book. There are enough color drawings of the various unit and personal markings that a serious modeler could make decals from them to use on their models.

This book contains a lot of information about Polish Spitfires that is not available elsewhere. It tells the story, and provides color drawings along with photographs that back up the marking details on the drawings. In short, anyone who is interested in building models of Polish Spitfires, or who is interested in the details of their operations, will find this a very useful book to have. I can highly recommend it.

Thanks to Stratus Books, MMP Books, and Bill O’Malley for the review copy.