Fulcrum MiG-29 Variants In Air Forces Around the World 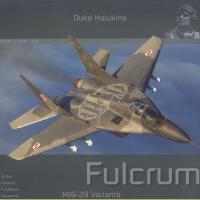 This is a new publication from Duke Hawkins Books and is the fourth volume in a series of books that have been recently published highlighting modern jets. This series got its start with The Sepecat Jaguar in July 2017 and has now seen twelve books in this series published. There is also a special limited edition on the Belgian Air Force F-16 and on the Juan Carlos I Aircraft Carrier. This series of publications falls under the name of Duke Hawkins, but it is not clear exactly who Duke Hawkins is. If you check out other retail sites on this series, you can find Robert Pied and Nicolas Deboeck listed as authors, but there is not much additional information on them. One of the bylines goes like this:

“So, there I was, looking for a book that could show me the Jaguar in every detail. I didn’t find it. I found a couple of photos online, but I wasn’t really ecstatic about that. That’s when I decided to make a book for myself. I showed it to a friend and he said: “We should publish it! And make other books too!” And here we are.”

This latest photo-essay monograph by Robert Pied and Nicolas Deboeckis is printed on high quality glossy paper. The front cover features a Polish MiG-29 of 303 Squadron carrying four air-to-air missiles. If you look closely on the inside verticals, you will find a portrait of a famous Polish pilot. The rear cover features another Polish MiG-29 Fulcrum rising about the clouds. I counted 289 full color photographs. There is text scattered throughout, but most of it would be considered detailed photo captions. The Table of Contents includes the following sections:

Although this book series first published in 2017, I really did not become aware of this series until I spied the Special Hobby 1/72 Saab Viggen special edition box with two kits (AJ-37 and SK-37) and the Saab Viggen book in this series. I had worried that I would not get one of these special edition kits, since the first round did not make it over the Atlantic to the US in the first run. The good news is that Special Hobby did a second run and they showed up at IPMS Nationals.

Since this is provides amazing source detail in color (289 color photographs!), this is an excellent reference for modelers. The detailed captions pick out plenty of small details for the modeler as you can see from the sample of five pages included with this review. Just on Page 18 alone, you can see the complexity of the fuselage skin covering GSh-30 gun in the leading edge. The fun of picking out all the flush rivets and panel fasteners alone is mind-numbing. Then skip to the section on Maintenance where you can see all the panels removed and all the goodies hiding inside. Hello super-detailers!

This is a fantastic book and a must for anyone waiting to detail up their MiG-29 Fulcrum. I even pulled out my Great Wall 1/48 kits to look at the plastic again. Caracal Models even has the decals out to dress up any 1/48 kit with two sets of the Polish MiG-29 (as seen on the front cover and inside the book) with the Polish portraits under “Heroes of Kosciuszko”. I have since picked up several more books in this series. My thanks to Casemate Publications, HMH Publications and IPMS/USA for the chance to review this great book.