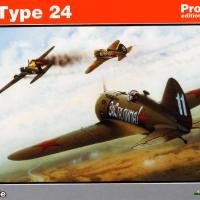 The Polikarpov I-16 was a Soviet fighter aircraft of revolutionary design; it was the world's first low-wing cantilever monoplane fighter with retractable landing gear to have attained operational status, and as such "introduced a new vogue in fighter design." The I-16 was introduced in the mid-1930s and formed the backbone of the Soviet Air Force at the beginning of World War II. The diminutive fighter, nicknamed "Ishak" or "Ishachok" ("Donkey" or "Burro") by Soviet pilots, prominently featured in the Second Sino-Japanese War, the Battle of Khalkhin Gol, and the Spanish Civil War. The Type 24 replaced the skid with a tailwheel, and featured the much more powerful 670 kW (900 hp) Shvetsov M-63 engine. The Type 24 also featured four ShKAS guns, proper landing flaps replaced the drooping ailerons, and a second cockpit door was added on the starboard side.

This is a re-release of the original 2006 Eduard 8149 ProfiPACK Edition kit with exactly the same parts and marking options as before. This means that inside the box you get the 92 grey plastic parts and two clear plastic parts (windscreen and reflector sight). Several of the parts end up being extras, depending on the markings you choose. You will also have a few exhaust pipes to sacrifice to the carpet monster. The injected parts are in Eduard’s standard dark grey plastic with minimal flash. The injected sprues are packaged in Eduard’s standard re-sealable plastic packaging. The single photoetch sheet and clear film (landing gear window) is well secured in with the decal sheet along with the pre-cut canopy and wheel hub masks. The 12 page instruction booklet includes views of the sprues to identify where the parts are hiding, along with color markings in Gunze paint codes and names. The decal sheet provides four markings options:

I chose the ‘B’ markings, Genadij Tsokolajev, 4.GIAP, Baltic Fleet, Lake Ladoga, April 1942. After studying several photographs of this aircraft, I decided to go with a standard three color paint job with a white overcoat for winter operations. The landing gear doors had been removed and rocket launchers were under each wing. Since the Eduard kit does not provide rocket launchers, this build went without. The build also went without the radio antenna on the turtle deck since it is absent in several photos, but does make an appearance in a photo showing just the cockpit area.

Overall, the fit is quite good. I used a combination of photo-etch and injected plastic parts for the cockpit controls. In my mind, some of the photoetch parts just did not give the same look as some of the injected parts. I drilled out the cockpit skylights and the pilot hand grips and glued the fuselage together. The instructions would have you insert the exhaust stubs in the first step, but I held them out till much later in the build to avoid painting issues.

In the next step, I corrected the cockpit floor by sawing off the sides outside of the floor rails. And then assembled and painted the cockpit ‘tub’. If you look at enough I-16 photos, you will see several variations in the seat and harness used. Fortunately, there is a clear photo of the seat used in one of my reference photos of Genadij Tsokolajev’s mount to match what Eduard has provided. I used the pre-painted photo-etched for the instrument panels along with the photo-etch controls. Just make sure you look at it good before gluing it in as you won’t see it after mating the fuselage halves.

Next up is wing assembly and mating the fuselage to the wing. I had read were some reviewers had problems with the front fuselage fitting properly to the wing, requiring fuselage spacers, but I did not have any issues there. I initially glued the upper wings to the lower wing at the tips only before mounting the fuselage. Since the front lower part of the fuselage assembly is open, you do have some flexibility in fitting. I left the pitot tube and guns off until final assembly to ease painting. The fuselage tail cap, rudder, and horizontal stabilizers were added next, followed by the tail wheel assembly. I added the fuselage gun covers and two small bumps (E22) seen in the last step in the instructions to the cowling.

I drilled out the fuselage gun ports in the cowling face and pressed the cowling onto the fuselage. It’s a tight fit and I had no issues with it coming off during painting.

Since I was building the kit with no landing gear doors, I sanded off all the gear door attachment points on the main and auxiliary gear struts. The instructions show using parts E6 to form a scissor linkage, but I don’t believe that is how the main struts worked. There are photos of a I-16 in a museum that is a conglomerations of an I-16 and UTI-1 and maybe some imagination that show these parts, but I could not spot this linkage in any other photos.

I assembled and painted the engine (2 parts) followed by several washes to bring out the detail and followed the instructions on using a ball point pen on PE1 to bring out the detail. The exhaust stubs seam lines were cleaned up along with the propeller blade and nose cone. The windscreen and reflector sight were dipped in Future for protection and set aside to dry. Later I applied the provided masks on the wheel hubs and windscreen before painting.

I primed the model with Tamiya Light Ghost Grey after masking off the cockpit. I painted the rest of the kit with Vallejo acrylics. The top coat received a ‘standard’ pattern of Russian Green and Dark Green with the bottom surfaces being painted Light Blue. Once dry, I hand brushed a thin coat of White until I got the coverage I was looking for. I was careful to go at an approximate angle of 45-degrees on the wooden fuselage, while the flying surfaces were front to back strokes. Once I had gotten the look I wanted, I sealed the paint with a coat of gloss before applying the decals. The decals went on with no issues, even with several coats of Micro-Sol to settle them down tight. Once dry, another gloss coat sealed the decals. Please be careful though! At this point the tail wheel assembly snapped in half due to handling. I took the rest of the tail wheel mount off and cleaned up this area before robbing a tail wheel assembly from an Eduard I-16 Type 10 kit (which will use the proper tail skid assembly).

At this point, I popped off the front cowling and masked and painted the cowling metal band Vallejo Steel. I finished the engine / cowling assembly and set it aside to dry. Next up were the exhaust stubs which were painted Flat Brown and Panzer Dark Grey. Using super glue, I placed each stub at an angle so that it was just slightly raised above the cowling exhaust port. You’ll want to be careful, since coming out at an angle, there is very little material for the super glue to hold the exhaust stub to the cowling port. I have not lost any exhaust stubs yet, but on the next I-16 kit, I will probably use a bit of modeling clay to provide support for the exhaust stubs.

Finally I pressed the propeller blade into the spinner, and placed, but did not glue, the assembly onto the propeller shaft. The main gear retraction cables were added, super-gluing one end to the main wheel hubs and then just pushing the excess cable into the gear bay until just the right ‘lax’ effect was achieved. I sprayed a coat of semi-gloss (protecting the windscreen and the propeller blades), and added a Panzer Dark Grey wash and a bit of dry brushing with Flat Brown.

Eduard’s Polikarpov I-16 is a relatively simple kit with no major fit issues. Their line of kits released to date allows one to build anything from the Type 10 through the Type 29. Now if we just get them to add the earlier Type 5 and some rocket launchers…

My thanks to Eduard and IPMS/USA for the chance to review this great kit.

Highly Recommended if you get the revised version