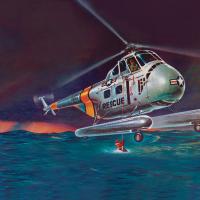 The other night I was watching a movie from 1953 called The Band Wagon starring Fred Astaire. It dawned on me while I was watching the movie that a person who watched it during its theatrical run may have well gone home after the show to work on this exact same model! The Revell kit was first issued in 1953 and is now 64 years old! The initial kit did not include the flotation gear, that was included in a subsequent issue of the kit. The kit stands up pretty well for its age and gives the builder the option of the flotation gear and regular gear. There is also a stand which was a common feature of kits from the era.

First off, the parts fit was quite good. I was expecting fit issues but there were none. The ejector pin marks and mold lines were a little odd compared to what we are used to now, but they were pretty well hidden and not really a big deal. There were some sink marks around the cockpit area, but very easy to fill. The cockpit itself is simple but there are nice pleated detail and two figures to fill it up. I added wiring to the back of the instrument panel to liven it up a little. The "cargo" bay was bare with no detail whatsoever and worse...no clear parts for the glass! I'm not sure if previous editions of the kit had the glass, but my review sample did not. The only fiddly assembly was the rotor system. All three blades are sandwiched between two plates with the main shaft running through it all. The fit of the shaft was a little loose which made the whole thing a bit of a chore to get together. The instructions also have you mount it to the interior when you are closing the fuselage halves, but I left it off for a loose fit after the model was completed so painting and transportation after it was completed would be easier. The kit has raised rivet detail which looks quite good but can make seam removal difficult for the flotation gear. I made a compromise and sanded out the front and rear of the pods but left the seam down the middle, the other option would be to sand it all down and redo the rivets with a riveting tool. The only other difficulty was the decals. The large yellow bands settled down ok, but they are not completely opaque so if I were to build another one of these I would undercoat the area in white or simply paint them on instead. It took many applications of Microsol to get them to snuggle down over the raised detail, but they look ok and fit well.

Overall it was a fun little blast from the past. It is a window into the earliest days of plastic models and actually stands up well! It also looks great on the shelf I want to thank Revell for providing the kit and more importantly, reissuing such a cool classic model.