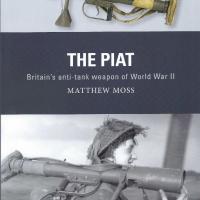 Osprey Publishing has been providing books for enthusiasts since 1968 and since then it has grown, evolved and taken on new challenges until it stands today as one of the most successful examples of niche publishing around.

Matthew Moss is a British author and historian specializing in small arms development, military history, and current defense affairs. Matthew has degrees from the Universities of Liverpool and Chester and has contributed to publications in both the United States and the United Kingdom. He runs the website Historical Firearms, a blog that explores the history, development, and use of firearms. He co-founded the Armourer’s Bench with Vic Tuff (https://www.facebook.com/armourersbench) a multi-media exploration of historic small arms. Matthew has contributed to a number of print and online publications including magazines such as Small Arms Review, Popular Mechanics, The Armourer, History of War and Classic Arms & Militaria. This is his second book for Osprey. He lives in Lancashire, UK.

Adam Hook studied graphic design, and began his work as an illustrator in 1983. He specializes in detailed historical reconstructions. Adam has illustrated Osprey titles on subjects as diverse as the Aztecs, the Ancient Greeks, Roman battle tactics, several 19th-century American subjects, the modern Chinese Army, and a number of books in the Fortress series. His work features in exhibitions and publications throughout the world. Adam Hook delivered the battle scene paintings for this book. Check out his webpage at: http://www.adamhookillustration.com/. Adam Hook now lives in East Sussex, UK.

Alan Gilliland was born in Malaya in 1949 and now lives in Lincolnshire, UK. Alan Gilliland spent 18 years as the graphics editor of the UK's Daily Telegraph, winning 19 awards in that time. He now writes, illustrates, and publishes fiction (www.ravensquill.com), as well as illustrating for a variety of publishers including Osprey. Check him out at alangillilandillustration.blogspot.com and https://reedsy.com/alan-gilliland. Alan Gilliland provided the cut-away illustrations for this volume.

Osprey's 74th book in the Weapon series is a square back soft cover including 80 glossy paper pages. The upper front cover features a color photograph of a PIAT from the Royal Armouries’ collection that shows off the early-pattern ‘A’-frame monopod, along with straight butt and quadrant sights. The bottom of the front cover features a black and white photograph of a PIAT gunner of 1st Battalion, The Norfolk Regiment, during the advance on Wanssum (Netherlands) on November 26, 1944. I counted 52 black and white pictures, 14 color photographs. Adam Hook contributes three battle-scene color paintings, including two, 2-page spreads. Alan Gilliland provides the labeled color cutaway illustrations of the PIAT Mk. I and the four color illustrations of the Mk I, II, III, and IV projectiles.

The PIAT (Projector, Infantry, Anti-Tank) was a British man-portable anti-tank weapon developed during the Second World War. The PIAT was designed in 1942 in response to the British Army's need for a more effective infantry anti-tank weapon. This required a steady hand because of the short range of the PIAT required its operator to get really close to the enemy tank. The PIAT was an improvement over WWI British technology, but it suffered from ammunition reliability and a punishing recoil. As WWII continued, Axis armor became thicker, and the PIAT became a less effective tool, especially compared to the US and German competition. The PIAT entered service in 1943 with its baptism being the Allied invasion of Tunisa. Some 115,000 PIATs were produced as it soldiered on until the early 1950s.

Matthew Moss ably describes earlier spigot designs like the Blacker’s Bombard followed by the design and evolution of the PIAT and its ammunition. Follow-up designs are also discussed along with other spigot based weapons. Matthew Moss then dives into the introduction into service of the PIAT beginning with training and its limited use in the invasion of Tunisia. Although there was no confirmation of the PIAT being a success in Tunisia, the PIAT achieved its first kill in the Allied invasion of Sicily in Operation Husky. This involved an attack on an ammunition lorry that really pumped up the troops. The next action, brought them back to reality when attacks on three enemy tanks failed when the ammunition bounced off the tank’s armor and failed to detonate. Nine days later, Canadian troops had better luck, taking out three tanks, a tank transporter, and three lorries. The PIAT also had some success in taking out enemy pillboxes, other buildings, and was useful as a mortar.

Matthew Moss covers the PIATs use in the Normandy landings, Operation Market-Garden, the Eastern Front, and in the Pacific. The PIAT saw service after WWII, including all the way into the Korean conflict, even though by that time the PIAT was considered obsolete. Feedback on the performance of the PIAT was positive as the soldiers involved quickly learned which situations it excelled in. That’s not to say there weren’t plenty of complaints. Matthew Moss finishes up with a nice comparison of the PIATs contemporaries: the American Bazooka and the German Panzerfaust / Panzerschreck. The contents include:

I found one of the sections quite interesting on an issue with the ammunition design. One of the major issues was shrapnel flying back to the PIAT operator from 100 yards away and wounding him, often severely. It took some time to identify the problem, but investigations finally identified what was happening. A brass ring that was part of the propellant charge cylinder was breaking up on impact. These brass shards were directed straight back to the operator by bomb’s tail tube at speeds of up to 3,000 ft/sec. This was finally addressed by the Mk 4 projectile.

I really appreciated the structure that Osprey’s Weapon series utilizes, starting with the origin of the selected weapon and the following discussion on its development, operational use, and finally a summary of its effectiveness in the ‘Conclusion’ chapter. Matthew Moss provides an easy read with plenty of photographs that support the storyline. The labeled cutaway illustrations provide insight into the PIAT’s operation through Alan Gilliland’s full color illustrations. Adam Hook’s color paintings put you into the battle in three different theatres. I was able to read the book easily over two evenings. If you own one the previous releases in the Weapon series, you know what you are getting. If this is your initial entry into this series, you will be quite pleased.