Life & Death on the Eastern Front 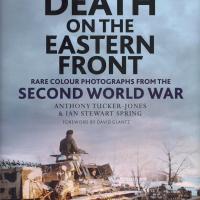 Let’s start by stating that the entire book is collection of color photographs taken by both original cameramen, as well as the regular foot soldier in the field. The photos chosen by the authors are one of the best I have the pleasure of seeing. The book is divided in three sections:

The section about The Ground War takes you from the beginning of the invasion of Russia and demonstrates types of equipment from both sides. You will encounter both soft skin vehicles, as well as tanks and other vehicles. The photos were taken in all kinds of weather and are a mother load of information and reference for the general individual. Through this section you encounter photos of personnel. These are candid shots of the foot soldier as well as some photos from civilians.

The second part of the book deals with the war in the air and Luftwaffe personnel and equipment. The book shows photos of fighters, bombers, dive bombers and of course the venerable JU-52 trimotor. You will find a small section of Russian aircraft destroyed and or captured. There is even a section about air defenses.The last part of the book deals with subjects like: the troublesome allies. Also POW’s, partisan conflict and medics are among several more subjects.

Throughout the book there are a lot of candid, as well as action shots. I found the color of the pictures very good taking into consideration their age. As an aside; all pictures were taken with German color film of the era. This is the first book in a long time that is entirely in color and as a modeler I enjoyed it very much.

There are lots and lots of photos that will inspire many dioramas.

My thanks to Casemate Publishing for allowing me the pleasure of reviewing this book.