Petsamo and Kirkenes 1944, The Soviet Offensive in the Northern Arctic 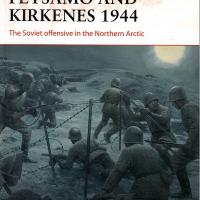 This book covers a short but brutal campaign near the end of World War II where the Soviets took northern Finland from the Germans, pushing them back into Norway. Finland had capitulated in September of 1944, and the Germans were seriously considering leaving when the Soviet Army (and Navy) attacked in early October. The battles lasted from October 7 to November 5.

The area in question was somewhat political, but there also was a port at Kirkenes, which is in Norway, and Petsamo has iron and nickel deposits and mines which the Russians wanted to deny to the Germans.

The surrounding area is rough, desolate terrain, with many steep hills and valleys. There was only one decent road in the area, so armored warfare was out of the question. The weather was poor, with temperatures ranging from 5C (41 F) to -5C (23F), but there was almost continuous rain and snow for the period.

There were several keys to Soviet success. One was the use of Naval Infantry (we would call them Marines) to perform flanking attacks by landing on the coast behind the Germans. Additional advantages were that the Luftwaffe was pretty much absent, and the Soviets had Il-2s, Pe-2s, and Yak-3 aircraft for tactical and strategic attacks, and the German artillery was under-supplied with ammunition. Although the Soviets had an advantage in guns, they also had problems getting shells to the front.

The Russians had a manpower advantage, but the German troops were Gebirgsjager, mountain troops with training and experience working in difficult terrain. There were many heroic actions on both sides, but also large numbers of casualties.

And the Russians won.

Many thanks to Osprey Publications for this informative book, and to IPMS USA for allowing me to review it.