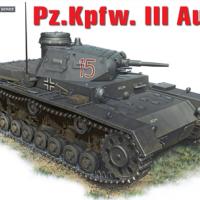 The Panzer III was one of the two work horses of the German Wehrmacht , together with the Panzer IV, serving on all fronts during the Second World War. And while the modeler has been well provided for when it comes to the later models (Ausf. E onwards) of the Panzer III, the earlier versions have been sorely neglected. Until now: Miniart of Kiev, Ukraine has announced that they will be doing the Panzer III Ausf. B, C and D in 1/35th scale. If the Panzer III Ausf. C kit under discussion today is anything to go by; we are all in for a real treat.

The kit comes packaged in a sturdy box with a beautifully rendered painting of the tank on the box top. The first thing one notices is that unlike the Panzer III Ausf. E onwards with their 6 main road wheels, the earlier versions of the Panzer III all had 8 road wheels. The kit parts in MiniArt’s Panzer III Ausf. C are all contained in one large plastic bag, rather than what I am used to these days which is each sprue being individually wrapped. However, on close examination of the parts only one may have been damaged by the MiniArt method of packaging. All the parts are exquisitely well detailed, with the on board tools (axe etc) for example having wonderfully petite molded on tool clasps, while other items have PE clasps from the small PE fret contained in the kit. The hull interior is devoid of any detail, but the turret has commendable interior details, such as a very nice 11 part commander’s cupola, extremely well detailed turret machinegun detail, main gun breach detail, etc. The kit tracks are individual link, beautifully detailed, minus ejection pin marks, and assembled using a simple pin system.

The kit instructions are nicely rendered, with a four sided color cover depicting the six color and markings options. A full sprue chart is included, and each assembly stage is nicely depicted and not too “busy”.

Construction starts, as seems to be the norm with armor models, with the lower hull and running gear: shock absorbers, road wheel arms, road wheels, drive sprockets, idler wheels etc. And after spending a lot of time looking the instructions over and carefully starting construction, I have decided this kit is only for “the experienced modeler”. Why? Well, firstly, MiniArt have incorporated a lot of very fine detail into the kit’s suspension: so lots of small, fiddly parts. But this normally wouldn’t be a problem, if all the parts had easily identifiable attachments points, one to another. Well, they don’t. Either the attachment points aren’t well defined at all or they offer up a LOT of wiggle room. In the case of the road wheels, in assembly section 9 and 10, each part comes with either an extremely tiny pin, or an extremely tiny pin hole. It is up to the modeler to carefully align the tiny pin, and the tiny pin hole, and frankly put, this isn’t easy, and is very tedious. It is extremely easy to misalign the pin and the hole. In the end and in frustration, I sliced off the pin, and eye balled the alignment of the road wheels.

Then there is the issue of wiggle room. The road wheel arms, parts Ad16 and Ad17 are attached to the hull by a pin that is glued into a hole. A second part, Ad3 and Ad4 also glue onto the road wheel arms, but looking at the parts concerned, there isn’t a clear spot for gluing the parts together. So the modeler has to use the instructions as a guide (they aren’t very clear either on this point), and then move things about as the glue sets in the hope that you get things in the correct alignment. Stating the obvious: if you don’t get things correctly aligned at this stage, then in later construction stages, other parts that fit around the road wheel arms will not fit properly.

Now in the end, the instructions were good enough, and my (I hope well reasoned) guesses accurate enough that I managed to get through the assembly of the lower hull running gear without any major “surprises”. There was a bit of flash on the road wheel arms, parts Ad17 and Ad16, which was a bit of a surprise given this was a brand new kit, but this was easily taken care of with a sharp hobby knife and some sand paper. I am sure the alignment issues would have lead to extreme frustration and ultimate failure for anyone trying to build this kit without a fair few kits already under their belt, so to speak?

In Assembly sequence 11 one starts the construction of the upper hull, of which there are three primary sections: part Ca3 at the front is the glacis plate, with separate two part driver and co driver hatches. Then there is the middle section containing the turret ring, followed by the rear engine deck with separate engine access doors. All three of these primary parts fit together very well and without any gaps requiring filling. Once the main upper hull parts are assembled, the modeler moves on to dealing with the vehicle’s mud guards/fenders. It was here that I discovered the one “defective” part in my kit, the left guard/fender, part E21. It had somehow become badly twisted either immediately after being ejected from the molding machine, or while being packed. I did my best to straighten this part back to its correct position, but didn’t quite make it. As a result my tank has some damage to its fender due to hitting something while on maneuvers!! At the front of each guard/fender, there are some tricky assembly sequences involving the hinged front section on each side of the vehicle guard/fender. Tiny, and I mean tiny (and fragile) PE parts are involved, which are extremely difficult to cut off the PE fret and hold in your tweezers without losing them to the carpet monster, let alone position properly onto the plastic parts. Another example of why I state this kit is for “experienced modelers only”.

As for the various parts that are then attached to the guards/fenders, these are very nicely detailed: fire extinguishers, axe, a five part jack etc. Parts Ca23/22/20 appear to be some sort of crew vehicle mounting foothold, but whatever they represent, they were so fragile that despite my very best efforts to safely remove them from the sprues, I failed, and shattered them into unusable wrecks. My model is thus devoid of this device, sadly.

Next comes the turret interior parts and their assembly. There are lots of them, including seats, turret traverse mechanisms, lots of main gun breach detail, interior machine gun detail, etc. The commander’s cupola consists of 11 parts as mentioned earlier, including 5 clear parts for the periscope glass, and the hatches have nice interior padding and latch details. The turret exterior’s detail is very nice, with the armored front turret visors being three parts each (two being the PE hinges), and these can be positioned either open or closed.

The tracks are single link by link injection molded parts, with hollow guide horns, which is very impressive. They come on 18 sprues (Sprue K), each sprue containing 12 individual links. Unfortunately each link is attached to the sprue by FIVE attachment points, each of which needs careful cutting with a set of hobby snips, and then the burr cleaned up with a sharp hobby knife and sand paper. I say “unfortunately” not because it is difficult, but simply because it is very time consuming. Once the individual links are cleaned up, they are put on a kit supplied vinyl jig for assembly 8 at a time, and pinned together with handed track pins. I would advise readers to do this in stages, three or maximum four pins at a time to avoid misalignment. Slip the pins into the holes at the outer edge of the track links, carefully slide them into place, then use a very small amount of glue to stick them in place, then cut off the excess sprue runners attached to the pins. If you are careful to avoid excessive glue, you get fully articulating track links. While this is as I say tedious, the tracks are one of the true delights of this kit.

Last to be assembled is the two part vehicle exterior radio antenna. In the first instance, the aerial part, Ca1, shattered upon removal from its main sprue. In the second instance, I felt the antenna was too chunky so was going to replace it anyway with an aftermarket brass antenna. This was extremely fine, and delicate. And when my back was turned it fell off the piece of tape it was attached to for painting purposes, and disappeared. So I will have to figure out a plan B for its replacement............

In the meantime, with construction completed, we now move on to the painting of and markings for this model. The kit comes with decals for 6 vehicles, five of them overall Panzer Dark Gray, one of them overall Panzer Dark Yellow. Two of the Dark Gray vehicles are from combat units, being from the 1st Panzer Division, Poland, September 1939, including white “241”, the vehicle I chose to model. The other Panzer Gray vehicles are from Panzer training schools in the period 1940-41, while the Dark Yellow vehicle is likewise listed as a Panzer training school machine, but from the period 1943. WHICH Panzer training schools are not mentioned in the instructions? The decals themselves are fine for the flat surfaces, but took a LOT of work to get them to stick and conform to any raised details, so I would rate them below average in quality compared with those say that have come in Dragon Models or Tamiya kits I have reviewed recently.

I painted my model overall Panzer Grey utilizing Tamiya’s XF-63 German Grey, mixed with some XF-8 Flat Blue and XF-2 Flat White, and thinned with Mr Self Leveling Thinner (lacquer). For the panel post shading, more white was added to the base color. I then incorporated a couple of dark washes to highlight the details, consisting of Mona Lisa thinner and Mig’s Abteilung oil paint range: Shadow Brown, and Black. The on board tools were airbrushed Panzer Grey, then painted utilizing Vallejo “New Wood”. Once everything was painted, decalled, glued in place, and weathered, the entire model was sealed with a couple of coats of Model Master Dullcote.

Once all the work with this kit is completed, you are left with a really great looking model. And at this point in time, the only injection molded plastic early Mark Panzer III models available in 1/35th scale are MiniArt. If you are up for a bit of a challenge, then I can highly recommend this kit being added to your Panzer collection. My thanks to DragonModelsUSA for providing IPMS USA with the review sample.

Right Side Close Up
Previous Next