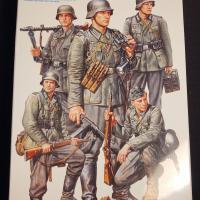 Tamiya has really stepped up it’s game in the figure department in the last few years. Starting with single figures and sets in the re-boxing of the Marder III M, Hummel, and 38 (t), the new designs have really made assembly and posing easier than ever. There are notches and tabs that help align the shoulders, legs, and torsos (molded in front and back halves) to avoid any gaps. There are also molded indentations on the back of the torso and in the pouches to attach the extra equipment to so they appear to avoid them looking as if they’re simply resting on the torso and belt. The included facial details are also much more expressive and individualized than in the past. In one figure, there is a separate boot and another has a hand separate from the arm which is a bit odd. The drawback to the parts being so specifically keyed to each other is that they really aren’t interchangeable. Mold lines are subtle and one figure had some pinholes near the eye that showed up as I was taking my close-ups for the review. That being said, the figures as is are really very good.

Inside the side opening box are two sprues for the five included Heer soldiers and a sprue containing weapons and equipment. There is also a set of decals for helmet and uniform insignia, shoulder flaps, collar tabs, belt buckles, and first aid can details. The equipment sprue contains three Kar-98 rifles, a MP40 submachine gun and ammo case, a MG34 machine gun and ammunition case (or first aid box), a grenade case with detailed insert, a pair of binoculars, a couple pistol holsters, and an assortment of bread bags, canteens, mess tins, entrenching tools, and gas mask canisters for each of the five figures.

Out of the five figures, three are labeled as Infantry. Infantry 1 is shown “taking a knee” next to the grenade case holding a Kar98k rifle. There are options for two heads- one with helmet and one with cap. This is the aforementioned figure with the small pinholes near the eyes. Infantry 2 is shown posed with one foot atop a small pile of rubble included in the kit, also holding the Kar98k. Infantry 3 is shown standing with his rifle by his side and holding an ammunition case. This is the one true weak spot in the design of the kit for me-- you are to just glue the case to his leg under his closed fist with no visible handle in sight- and if you want to add one, you’ll have to drill a hole through the fist to pose it.

The remaining two figures include a non-commissioned officer and a machine gunner. The officer is shown holding binoculars and an MP40. He also has the option of the two different heads. The machine gunner is shown holding his MG34 over his shoulder by the front tripod. In all cases (except Infantry 3), the hands are perfectly molded to hold the weapon or item illustrated.

After assembly, I primed the figures with Krylon gray for plastic. I used a Vallejo paints for the figures and equipment and AMMO by Mig metal pigments for the metal areas. My figure painting skills aren’t the best, but it is nice to have some good expressive figures to use for a base. I kept weathering to a minimum as I am not sure yet what sort of vignette or diorama they’ll be placed in. Overall though, I am very pleased with the quality of the figures that Tamiya are putting out now-- they really are molded as nicely as most resin figures I have seen. My sincere thanks to Tamiya and IPMS-USA for the review sample.