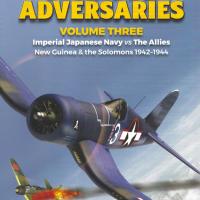 This is the third installment of Claringbould’s accounts of aerial combat between Japanese and Allied air forces. Volume 3 continues with accounts of Japanese Naval Air Force operations in the Solomons and New Guinea from 1942 to 1944 against Allied forces - USN, USAAF, Australian and New Zealand. Everything that I wrote previously about Vol. 2 applies here regarding the author’s approach to documenting both side’s account of individual actions by researching official records, eyewitness testimony, personal narratives and diaries, and often evidence obtained from recently discovered wreckage.

The 16 stories told here reflect a wide range of actions and incidents from the 1942-1944 timeframe. They include the first “kill” claim made by a 5th Air Force P-38 pilot, Capt. Bob Faurot, not by gunfire, but from the splash of an exploding bomb dropped by Faurot. The bomb missed its intended target - the Japanese airstrip at Lae - and exploded in the water off the end of the strip, catching a Zero taking off at just that moment. American eyewitnesses confirmed Faurot’s claim, but Japanese records dispel the claim. Other stories include the only long-range Japanese bombing mission against the US rear base at Espiritu Santo by an Emily flying Boat, coincidentally occurring during a visit of US Navy Secretary Frank Knox, and accounts of both Japanese J1N1 Irving and American P-70 night fighter actions. Each story is illustrated with several aircraft profiles (41 different aircraft in total). Also included are five 3-views and five illustrations depicting events from the accounts. Aircraft depicted include Japanese Bettys, Nells, Rufe, Irvings as well as numerous models of Zeros, plus American Corsairs, Wildcats, P-38s, P-39s P-70s, PB4Y, B-17s, B-25s Australian Beaufighter and New Zealand P-40s. All of the illustrations are very nicely accomplished by the author himself.

Once again, Michael John Claringbould has presented a wide-ranging selection of events from the Pacific War, some well-known and some virtually unknown. Each is well researched and documented, and accompanied with numerous illustrations based on extensive research, giving the modeler the reference to create a specific replica with its own unique story to tell. Thanks to Casemate Publishing and IPMS for the opportunity to review this excellent book.