Foxbat Tales - The MiG-25 in Combat 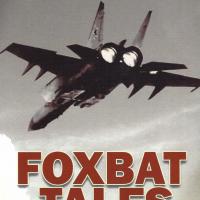 The MiG-25 conjures up, at least for me, huge engines and wicked speed. I remember when the Russian pilot defected to Japan in one. It was impressive looking. That was at a time when the Russian military was very secretive. I’ve always had a love of the bad guys, and in my early military days there was none badder than the MiG-25.

This paperbound book contains 122 pages of information that is easy to read. Once I sat down with the book, I did not want to put it down. There are close to 50 black and white photos, some show unique markings. This book is unique in its ability to follow the combat career of this fighter type. Starting in the first chapter we are taken through the development of the aircraft.

This is followed up by the defection in 1976 by Viktor Belenko. As a fighter an unknown entity with perceived capabilities. However, it was not very good as a fighter which wasn’t found out until the West had an operational aircraft to look over in Japan. His ability to penetrate Japanese airspace was eye opening to the West and its allies. The airplane and the secret manuals he carried were nothing short of phenomenal. And helped to dispel some of the mystery surrounding the aircraft.

The MiG-25 was designed to fly fast and high to intercept the new B-1 Bomber. It was intended to intercept American bombers over Russian airspace. The MiG-25’s very existence led to the development of the F-15 and F-16 fighters in the West to counter the threat. One thing the MiG-25 can never be accused of was being slow. The HUGE engines propelled it through Mach 3. This made it perfect for the photo recon role, as well as, the fighter interceptor role it was designed for.

The MiG-25 had a great combat career in the Mideast. It confounded Israeli air defense network with its speed. As a photo recon bird it was unparalleled. But it just wasn’t against Israel. The Israeli war with Syria, allowed the MiGs to fight and photograph. The results were to prove less than ideal. The Israelis had obtained the F-15 to counter the threat posed by the MiG-25. As a result, Syrian MiG-25s were shot down.

Libya also used the MiG-25 against the Americans who were enforcing the No Fly Zone. While there were no shootdowns there were some ‘engagements’.

The next chapter deals with the MiG-25 being utilized during the Iran/Iraq War. In the Iran/Iraq War the MiG-25 again proved itself as a capable photo recon bird and fighter. It did however come up against the newer American made F-14 Tomcat. While there was a MiG-25 ace in the war, he was subsequently shot down by one of the F-14s. The use of the Phoenix missiles was very effective against the MiG-25. Some of the engagements are described.

Then there is the Iraqi use in Desert Storm where the MiG-25 claimed its only American air to air victory and F/A-18 flown by Scott Speicher. The F-15s and F-16s took their toll on the MiG-25s. The rest of the war had the MiG-25s literally buried in the sand. After Desert Storm there were other engagements during the enforcement of the no fly zones. These are covered in good detail.

Afghanistan and India also used the MiG-25. And with that the book ends.

I thoroughly enjoyed reading about this amazing aircraft. If you have the Kitty Hawk or ICM kits this is good inspiration. You will not find detail photos but the photos provided, although in black and white and occasionally grainy, are very helpful in getting the markings correct. I look forward to reading more by this author as his style of writing is easy to read and entertaining.

Thanks to Mike Guardia and IPMS/USA for the review copy. You can obtain yours on www.amazon.com .