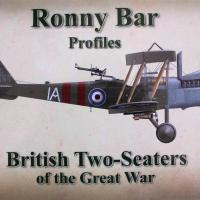 Most of the information published on the subject of World War I aviation deals with the development of single seat fighter types, and it is refreshing to see a book dealing exclusively with the less publicized two seaters. At the beginning of the war, airplanes were seen primarily as a means of observing the enemy to see what they were doing, or were capable of doing, and for spotting the results of artillery fire.

As the war progressed, it became important to deny the enemy the same advantages, so planes were equipped with guns, and the fighter plane evolved. However, the observation plane and bomber continued in use, and these needed better performance in order to defend themselves against fighters. As engine power output increased over the years, two seaters became better performers, and some, such as the British Bristol Fighter, became creditable fighters, and actually remained in service long after the end of the war, some lasting into the early thirties. The basic layout of these aircraft changed from a short fuselage in front with an engine with a propeller at the rear and a gunner located ahead of the pilot , and exposed structure reaching to the tail surfaces, to the standard long fuselage biplane with the engine in front, with the pilot ahead and the gunner behind. The structures remained mainly wooden, and nearly all were still biplanes until the thirties.

The book consists of a series of paintings, providing side profiles and plan views in smaller scale of the major British types of two seaters used during the war. The types of aircraft are as follows:

Each aircraft has at least one side profile drawings in large, 1/48 scale, and a number of plan views are also provided in 1/72 scale. Drawings are highly detailed, and include such things are extra equipment, armament details, and ordnance carried. Other details, such as control cables and structural rigging wires, are also shown. The wide variety of types shows the development of these aircraft, and the drawings themselves show the progress in aeronautical development that occurred during this time period. I would hope to see more publications of this type from this artist, as it looks like the beginning of a very useful series of books dealing with early aircraft. Maybe German aircraft will be next.

This book will be an excellent reference for anyone building a model of a British World War I biplane. If you have any interest in the aviation of this time period, this is a book that should be in your collection. Very highly recommended.

My thanks to Casemate Publishers for the opportunity to review this book.