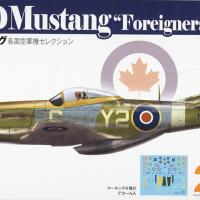 The P-51 Mustang is evaluated as one of the best fighters in World War II, not only the United States Army Air Corps, but also the highest peak of the piston-engined fighter that was adopted in various countries around the world and stayed active for a long time after the war. The P-51D, powered by the Merlin engine, is considered by many to be the definitive version of the Mustang. With its aerodynamic and sophisticated design, the P-51D Mustang has become a masterpiece fighter with a well-balanced variety of performance required for a fighter aircraft, such as excellent high-speed performance, long range, stable altitude performance, sufficient athleticism and fighting ability.

In the typical Platz end-opening box, you will find two complete kits; one on each sprue, with two clear sprues for the four canopies (2 extra!). Each kit is comprised of 35 light gray parts, plus the clear one-piece canopy. Detail is lovely for this tiny scale, including the finally engraved panel lines, radio set, and wheels/undercarriage. The plastic is high-quality, and responds well to Tamiya Thin Liquid Cement.

The instructions are a simple affair. Clearly illustrated in four steps, all text is in Japanese & English. Color callouts are for GSI-Creos Mr. Hobby Aqueous. The reverse side of the instruction sheet has color illustrations for all four paint/decal schemes.

Construction is quite straightforward. The only real “difficulty” anyone might have is simply related to the diminutive scale. The radio mast, tailwheel, and exhaust stubs are practically microscopic. The only filler used was to fil the 4 tiny holes on the wings’ undersides. They are mounting holes for the rocket launchers included with a different boxing of this kit (“Foreigners” does not have the extra rocket launcher parts.). A touch of putty for one model, and a touch of Mr. Surfacer 500 for the other model for comparison, and the holes disappear. The canopy/windscreen fits the fuselage perfectly, which is not always the case with Platz’s’ 1/144 offerings. I will state that even in this tiny scale, I can’t stand not having a seat harness to add character to the cockpit. I tried to fashion some from Tamiya tape, but they’re to be so small I found it too frustrating. As such, I ordered a photoetch fret of 1/144 Allied seat harnesses from Brengun-Hauler. They’re perfect and I can sleep at night.

Again, this boxing offers decals for four foreign-use P-51 D Mustangs. They are as follows:

I found the decals to be in perfect register. However, on the anti-glare panels, there is fine pixilation noted to the eye. I also found the anti-glare decals needed a lot of slicing, dicing, and Mr. Set Softer to conform. In the future, if I were to build this again, I would mask and paint the panels. The decals also are a little thick for this scale. Positively, the sheet is extensive, including stencil data for the auxiliary fuel tanks (!), propeller logos and yellow tips (for one side), walkways, and code numbers, and even personal markings. The RAF Mustang IV has a yellow windscreen and canopy base, which are also decals. I’d probably mask and paint those as well. Aside from the antiglare panels, the rest of the decals settled down fairly well with Micro-Sol.

The models were airbrushed with Alclad II Aluminum through a GSI-Creos P771 airbrush at 0.55 bar. Alclad II Aqua Gloss Clear was applied before and after decaling. Panel lines were washed with Ammo by Mig Blue Black Panel Line Wash.

I’ve been a big fan of the 1/144 Platz kits for years, and this release just reinforces my love for them. The model is accurate, simple to build, a bargain (2 kits for less than $20!), and they take up little valuable display case area. I highly, highly recommend this boxing. My thanks and gratitude to Platz and IPMS/USA for the review sample.