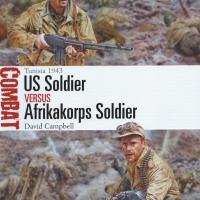 Operation Torch, launched on 8 November 1942, landed Anglo-American forces in Vichy-controlled Morocco and Algeria to create a second front against the Axis forces in North Africa, catching Rommel's German and Italian forces in the claws of a giant pincer.

The US Army was powerfully well-armored and equipped, but fresh to wa, and it showed. Organization suffered from a surfeit of peacetime theories and training was insufficient and ill-applied. Despite such failings the US GIs and their commanders learned very quickly, adapting to German tactics and the realities of mechanized warfare. The Axis forces in North Africa were seasoned by years of fighting against increasingly powerful British and Commonwealth forces, and were led by one of the Reich's most capable generals. The German doctrine of mechanized warfare had proved itself time and again, but ever-growing logistical and supply problems were blunting its effectiveness.

From Sidi Bou Zid to El Guettar, this fully illustrated study pits the US Army against the best that the Axis forces in Africa had to offer.

Osprey has continued its Combat series with issue 38 - with a look at the North African front. Like the other books in the series, the reader gets a look at both sides on the conflict- and is provided with a thorough overview of the arrangement of command, equipment, and tactics of the opposing forces. The book is broken down as follows:

Osprey continues to hit it out of the park with this Combat series. Each chapter is interspersed with excellent black-and-white photographs, color maps, and an occasional period color photograph. The images are ones not normally seen and give a great support to the text. This volume is an excellent addition to the series and provides a valuable resource to the historian or modeler interested in recreating armor, artillery, or infantry units from the desert campaign in Tunisia. I highly recommend the book and offer my sincere thanks to Osprey and IPMS-USA for the review copy.