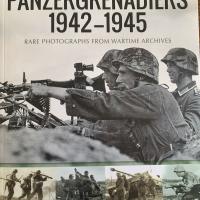 With every major conflict or war there are new developments on how fighting gets executed. The German use of the Panzergrenadiers is one such development that came along to support their novel Blitzkreig tactics of the Second World War. If a charge was to be ‘lightning’ fast, it could not be done with the traditional walking pace of infantry following fast moving armor. By motorizing troop movements via armored carrier and piggybacking personnel on tanks, German troops could move quickly to take advantage of the rapid changes in the battlefield.

Like other books in the Images of War series, Panzergrenadiers 1941 - 1945 is mostly photographs with excellent captions letting you know exactly what you are seeing. Often times, the equipment and artillery used by soldiers are identified, as well as the alterations made to standard vehicles. Chapters in this book are broken out by year with two to four pages of text introducing each chapter. In the two part Appendix of the book you will find brief histories of each Panzergrenadier division and how standard infantry divisions were reorganized and re-equiped to for this new function. This is far from a comprehensive historical record but Baxter did not intend it to be. He gives the reader just enough history to put the bulk of the book, with its pages of photos, into context.

For those who enjoy building vignettes or dioramas, the Panzergrenadiers provides a fantastic subject for incorporating personnel, vehicles, stowage and artillery. And with quality images such as those provided in this edition of the Images of War series, your imagination is truly the limit. Need ideas for what a Panzerkampfwagen IV would look like when it is covered with troops in winter gear making its way down dirt roads? Wondering what the spacing would be for a column of halftracks charging into battle? Answers to those questions are in this book. Overall, Ian Baxter has, again, done an incredible job of assembling pictures that you won’t see in any other book.

Thank you to Casemate Publishers and IPMS/USA for providing this book to review.