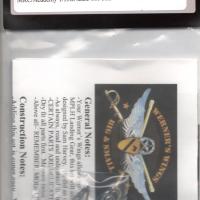 Werner’s Wings has been around for some time and is known primarily for rotary wing subjects offering resin and resin in 1/32, 1/35, 1/48 and 1/72nd scale. Their attention to detail rivals all other resin and decal companies on the market and that can be attributed to the owner, Floyd Werner, who served in the US Army as a helicopter pilot and a helicopter pilot for a local police department. With Floyd’s personal experience with rotary aircraft and his connections in the aviation community, reference material he uses can be trusted to be the most authentic.

This set is a 3D printed item instead of a traditional resin set. An advantage of 3D printed items, major components can be made in one piece instead of casting multiple parts and you can also get super fine details which are apparent in this set. This set contains five printed parts, one support structure and four identical clamps for the blades. As with resin sets, the 3D printed pars are brittle and you may encounter a few broken pieces in the bag. This set does not include any provisions to fold the rotor blade which is a fairly simple procedure with plenty of reference material available online.

Test fitting the items on my OH-58D, I started with the support structure. Placing the structure approximately in the same location as reference photos provided in the instructions, the structure stayed in place and hugged the contours perfectly. No adhesive was used when I placed the structure on the tail boom and took the picture. The next item to test fit was the blade clamp which I did see a small issue with. On my sample, the inside shape on the clamp reduced in size toward the middle which is the opposite shape needed. On the first test fit, the 3D printed part broke on a corner. My solution to prevent this on the next three clamps was to add very hot water in a small bowl and place that on a coffee cup warmer. I put the clamps in the water and let the parts rise in temperature, softening the 3D printed part. Using the reference pictures provided, note how the clamp is orientated on the rotor blade. With a rotor blade ready, immediately remove a clamp and put it on a blade while still warm. You may only get the clamp on slightly and have to dip the blade with clamp on and rewarm the parts. Once you get a clamp on past the taper in the blade, let it sit until fully cool. The clamp will retain the correct shape and will be ready to install later in your build.

This set will save some shelf space for your builds and capture a unique configuration for your OH-58D. This set shows the very fine work from Werner’s Wings and it is nice to see use of an expanding technology to produce fine details. I plan on going to Werner’s Wings resin first on future helicopter builds. It is nice to see a company covering the rotary wing subjects with this much dedication.

I would like to thank Werner’s Wings for this review sample.