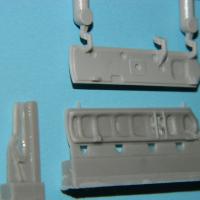 IPMS/USA welcomes Jeffrey Kubiak of Hypersonic to the list of producers of useful bits and bobs for those of us with Advanced Modelers Syndrome (AMS). And thanks to IPMS leadership for sending it to me to be reviewed.

Jeffrey began Hypersonic models in the UK, and has recently moved to Japan… a major change of scenery. Originally he started up with resin and detail upgrades for the Special Hobby X-15 kits… and now he’s expanding… making up for lost time, so visit his site for not only this item, but several upgrades aimed at improving the Academy F-4 kits, and, most recently, the Zoukei Mura Phantoms as well.

Consisting of 2 perfectly-cast resin parts, this nose gear door is a total replacement for the kit item. It addresses the “busy” factor missing on the venerable Hasegawa early A-4 kit. Early A-4’s had essentially an outer skin section of the nose with structural stringer, bulkheads, and sidewalls visible for the door. In this case the kit landing gear door is non-descript as the later version doors were enclosed for strength and durability. New A-4s are not as interesting as the early Scooters IMO, but I’m an old guy…

To assemble: Gently toothbrush clean the parts with Dawn ® dishwashing detergent or Blech white ® tire cleaner (yes, that’s how they spell “Bleach”…) to degrease and remove mold release, then carefully remove the casting blocks from the parts (taking extra care with the nose gear door actuator). Primer and paint with White, and use a red sharpie to paint the edge of the door interiors.

Included in this set is a detailed installation instruction sheet, including measurements and drawings on where to cut out the lower fuselage for the nose gear door hinge points. No butt join here! Make the cuts, and install the door and piston. DONE.

When finished the appearance is much improved for the front of your early scooter. My ratings are full 10 for subject, packaging and execution. Well done Hypersonic!

Thanks to Jeffrey for sending this fantastic review item to IPMS USA, and John and Phil for the build review opportunity. These are motivators for the future of the hobby…