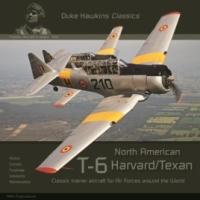 The North American AT-6 Texan was originally developed during the middle thirties as an advanced training monoplane. Earlier versions, designated BT-9through BT-9D, numbered slightly less than 300, were used as basic trainers. They had fixed landing gear 400 hp. Wright R-975’s, and many survived until the end of World War II. The earliest versions were designated BC-1, for “Basic Combat”, and nearly 300 were built before being reclassifies as AT-6, for “Advanced Trainer”. These had 600 hp. Pratt and Whitney R-1340’s, and engine which remained with the airplane for almost its entire life. Navy versions were called SNJ, and they were built until the end of the war, going up to SNJ-6. The Army Air Force AT-6 was built until the end of the war, slightly more than 10,000 being built. These went from AT-6 through AT-6F, with postwar variants designated T- 6G , with Navy versions going as high as SNJ-8. In addition, a significant number of AT-6’s were produced by the Canadian Car and Foundry firm under the designation Harvard Mk. IV. An Australian variant was produced during the war as the Wirraway, and this type was used as a close support aircraft, one pilot even managing to shoot down a Japanese plane while flying on in the islands. The Japanese even bought the production rights to an early version, and manufactured a few as trainers. in addition to this, there were fighter versions, designated P-64 by the army, while the Australian fighter was called the“Boomerang”

This book is not a typical historical treatment of the history of a famous aircraft, as these already exist, notably Dan Hagedorn’s North American’s T-6, A Definitive History of the World’s Most Famous Trainer. This book is actually a collection of color photos of existing AT-6’s. The military disposed of their AT-6’s by the middle fifties, and many of these were sold to civilians, who continued the history of the type. These were called “Warbirds”, military type aircraft owned by civilians and operated in some kind of military markings. They are to be seen at nearly every EAA fly-In, and others as well, and are usually in very colorful military paint schemes. Although they do burn a lot of gas, they are relatively inexpensive airplanes to operate, compared with the fighters and bombers one usually sees at fly-ins. The AT-6 warbirds can be seen at fly-ins throughout the world, and sometimes their owners will take you for a ride in one. They say it is the ultimate flying experience, and although I have flown in military types as the Ryan ST, Stearman PT-17, Fairchild PT-26, etc., I’ve never been lucky enough to experience the back seat of an AT-6.Ssomeday, maybe.

The book is organized in a rather strange way. The authors contacted owners of these aircraft and did photographic surveys of the planes, starting with types, then going onto forward fuselages, wings, engines and propellers, cockpits, landing gear, rear fuselages, vertical and horizontal tail units, and maintenance features. At the end, there is a section entitled ‘action” which includes dramatic photos of various aircraft in flight. Remember that these aircraft are all highly maintained aircraft that are probably in better condition than most of them were during their service lives. The planes all carry markings they carried during their years of service, although I suspect that some are more colorful. One significant feature of the book is the collection of photos of various details seen on the aircraft, although these are closeup, a significant asset for modelers. Granted that some of the electronics is much more advanced than the low frequency units used during the war, but it shows what the airplanes look like today. Each photo is accompanied by a caption that explains the subject and gives specific information on the aircraft. Each plane has a photo of the entire aircraft, followed by several detail photos of the particular feature under discussion.

A history book this is not, but it is a fascinating collection of photos of aircraft from the past that are still maintained at a high level and flown by their owners for fun or for educational purposes. Unlike a lot of warbirds to be seen today, these color schemes appear to be accurate. And they aren’t all American. There are photos of Canadian, New Zealand, British, French, Belgian, Swedish, and even South African aircraft. This book is certainly worth getting, as you will spend hours going through it, looking at the details and becoming more familiar with an airplane that youthought you already knew inside and out.

Thanks to HMH Publications for the review copy, and thanks also to Phil Peterson and Bill O’Malley of IPMS for the chance to read another excellent book. My aviation education continues.