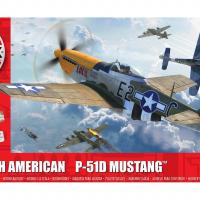 Colonel Thomas J.J. “Jack” Christian’s personal mount was an early P-51D-5-NA, serial number 44-13410, Code E2-C, with “LOU IV” painted on the port side of the engine cowling, forward of the cockpit and just rearward of the exhaust manifolds. The aircraft was named after his wife, Marjorie Lou Ashcroft Christian. The name “ATHELENE” was painted on the starboard side of the fuselage forward of the cockpit and below the exhaust manifolds. LOU IV was the most photographed P-51 Mustang of World War 2, and was an early P-51 D-5-NA (with the “bubble” canopy) without the stabilizing tail ﬁn addition of the later definitive –D models. Additional photographs better indicate LOU IV’s colors and markings, including a yellow propeller spinner, a yellow engine cowling, a bare metal fuselage with a mottled camouflage pattern of dark green and /or black on the top surfaces, and “invasion stripes” beneath the fuselage roundel and on the bottom of the wings. On 12 August 1944, at 1505 hours, 361st Fighter Group commanding officer Colonel Thomas J.J. Christian, Jr., flying the lead plane, Lou IV, was killed and his Mustang destroyed in a dive-bombing attack against the Arras railroad marshaling yards in Boisleux-au-Mont, France.

The instructions are what one would expect from Airfix these days. Printed in colour, colour callouts for Humbrol paints, and each previous completed step being highlighted in red. Interior decal callouts as the build progresses, and two full-colour paint schemes. One thing I really liked is that if the modeler wishes to paint the invasion stripes, there is a notation for exactly how wide to paint each stripe (9.5085mm) and how wide each wings’ section should be when completed (47.5435mm). The dimensions are based on the real stripes having been painted 18” apiece in WWII. To me, this is a much-appreciated attention to detail. I will point out that Airfix thanks Christian Alamy and Roy Sutherland for their assistance in the development of this kit on the first page. Mr. Sutherland, you may know, is the owner of Barracuda Studios and produces aftermarket resin and decal sets. His line includes several P-51 improvements, and I believe his input is evident in this kit.

Construction, of course, starts in the cockpit. The pilots seat has the side braces and harness belts molded into it in such a way that in 3 pieces, the seat, harness, and braces are perfect. Some careful painting and washes, and the seat looks great. The completed cockpit is very nicely-detailed, and aftermarket parts are not really needed. The cockpit then sits on the supercharger assembly, which goes back to the tail wheel well. There’s a fair number of parts involved, and getting one out of line leads to big ripple-effect problems down the line. Once everything was said and done, it all fit perfectly into one side of the fuselage. When I closed it all up, however, there was a large gap along the underside from the supercharger intake back to the wheel well. No amount of manipulation corrected it. As a result, this model has way more filler putty on it than I think it ever should have. I may have misaligned something further up the line, but regardless, this design feature is rather poor. Fortunately, Airfixs’ soft blue plastic allows for easy sanding. The rest of the build went pretty smoothly. Multiple options are in the build, included posable flight surfaces, wheels up/down, etc. Be careful with the propeller assembly. I painted it, then glossed and decaled the wrong side! It only fits one way into the spinner plate, and I neglected to test fit it first. There are numerous heavy sprue gate attachment points, seemingly on the more delicate and most important parts. The fuselage halves and wing parts were carefully removed with a micro saw to preserve the integrity of the molding. There is a tiny rear-view mirror that attaches to the top of the windscreen. I tried several times to mount it, to no avail.

The decals are one of this kits’ high points. They are in perfect register, and include cockpit data plates and something I’ve never seen in a P-51 kit prior to this-an instrument panel decal with the yellow demarcation separating instruments. I think that Mr. Sutherland’s input is evident here. The decals responded very well to Micro-Sol. The decal sheet is not without a head-scratcher, like other aspects of this project, though. The modeler is instructed to trim 3mm from the port & starboard fuselage invasion stripe decals. Why not just print them to fit correctly in the first place?? I was unable to get the bottom edges to meet congruently, so maybe I didn’t trim them straight. The underwing invasion stripes don’t fit quite well either. When lined up perfectly with the wheel wells, they creep into the wings’ leading edges unevenly. Again, maybe it’s me. I do appreciate how well they reacted to the Micro-Sol, especially around the compound curves of the fuselage.

Paints used were a mix of Tamiya and Gunze acrylics. The bare metal is AK Extreme Metal Flat Aluminum.

For a few bucks more than Tamiya’s 1/48 counterpart, and for about $23-25 less than Eduard’s Pony, this kit from Airfix is a solid contender in the quarter-scale Mustang market. Despite having some fit issues (which may have been my own doing), and those invasion stripes, this kit produces a gorgeous Mustang at a fair price point. Definitely recommended.

My thanks to IPMS/USA and Hornby Hobbies LTD for the opportunity to build this kit.