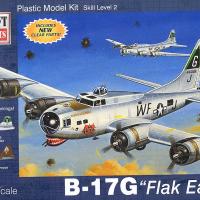 First reason to like this kit – they’ve completely redone the clear parts. Trust me, this mold has been around the block a few times, and these clear parts are much better.

The Aircraft I Built

This B-17G is not done with the kit decals. Just before I started this project, I attended IPMS Las Vegas “Best of the West” contest at Henderson, NV. I picked up a set of Kits-World decals for the B-17. The provided decals would have been just fine, except one of the aircraft on the sheet has a personal connection.

“American Beauty” 2S*G, serial 42-98008, was crewed by Virgil Brummett of West Peoria, Illinois. Virge was flight engineer and top turret gunner on this aircraft. He worked with my father, and I got to build him the Airfix B-17 from a photograph he provided. When I saw this sheet on the vendor’s table, I HAD to have it. I’ve also done a review of these decals for IPMS/USA.

This is an older mold, but Minicraft has kept it in good shape. One of the indicators that it’s not brand new is that it only requires 6 steps in the instructions to finish building the kit. And two of those steps are for either in-flight or stationary versions. You get props with blades for the stationary one or prop hubs for the in-flight version, and you cut one of the struts on the gear legs to tuck the wheels up.

The parts fit nicely, with almost no need for putty. I did have to fill the joints for the wings/fuselage, but the fuselage halves and wings required only a little scraping to give a decent seam. The push-through horizontal stabilizer fit pretty wel, too.

So now it was time to begin the painting.

I put a coat of Future (yes, I still have a bottle of Future) on the entire aircraft, and prepared for markings.

I put the Minicraft decals on first. These are all of the windows, including the waist gunner positions and the sides of the nose. If you wanted to, you could use decals to do the cockpit, too. Considering the lack of detail in the average 1/144 cockpit, that’s not a bad idea.

The Cartograf decals provided in the kit are a superior product. They went on well, allowed me to move them, and then stayed where I put them. Well, except for one nose window, which wanted to float instead of stick. I also used the stars and bars for the wings from the Minicraft markings.

After the windows, etc., had a chance to set up thoroughly (about 2 days), I followed up with the “American Beauty” markings from Kits-World.

Another coat of Future, and I was ready to finish.

I always save the fragile parts and fiddly bits until last. Even then, I sometimes manage to detach or break something during final assembly. Not this time, though. I added the clear parts, the tail wheel, the landing gear, and the props. And it was finished.

I left off the guns, as Virge said that unless they were prepped for a mission, the guns were removed so the armorers could clean them.

Highly recommended. This is a really good kit, especially considering the age of the mold and the size of the model. Fit was good, and I had fun doing this build.

Thanks to Minicraft for the review kit and IPMS/USA for letting me review it.