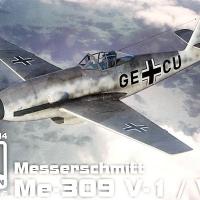 The Messerschmitt Me-309 was envisioned as a replacement for the Me-109 in late 1940. The aircraft was to feature a pressurized cockpit, a fully retractable, tricycle undercarriage and a variable geometry radiator. The Me-309 was never to become much of a priority for the powers that be owing to the success of adapting the Me-109 to larger engines and heavier armament and the Focke Wolf 190 coming into service. Four prototypes (V1-V4) were constructed with flight testing continuing into the last quarter of 1943.

Brengun has released a 1/144th scale kit of the Me-309 with alternate parts to construct either the V-1 (GE/CU) or V-2 (GE/CV) prototypes. The primary, exterior difference between the two prototypes was a different tailplane configuration and shortened wing. [Fun Fact: The developmental people went through four different tailplane setups before they got one that worked well enough.?!] The second prototype was written off on its maiden flight after crash landing due to a collapsed nose wheel strut. Brengun supplies markings for both aircraft on a small decal sheet.

The forty-four injected molded, light gray parts come on two sprues, with a clear canopy and the aforementioned decal sheet. The marking guide is printed on the back of the box. As this is a model of a prototype, I took some liberties with the paint scheme. The completed model was painted with RLM 76 and then RLM 74 was stippled onto the upper surfaces in a vain attempt to do a mottled camo scheme.

The kit features an interior with the pilot seat and cockpit floor (molded as one piece), a separate control column and a forward control panel with molded instrument bezels. More than adequate for an aeroplane model in this scale. The more detail-oriented modeler can avail themselves of a P.E. detail set (#144169) and a vacu-formed canopy (#144167) available from Brengun. Do remember to add some nose weigh before closing up the fuselage to avoid the dreaded TSS (tail sitter syndrome).

Some of the other build options are: an open or closed engine radiator, shortened wing tips for the V-2 prototype and different tail plane configurations. The wing tips will require some surgery as a portion of the wing will need to be removed and replaced with kit supplied-bits for that configuration.

The landing gear struts are single pieces with multi-part gear doors for each assembly.

[Fun Fact: The Me-309 featured a nose gear that rotated ninety degrees before retracting into the forward fuselage.]

The kit goes together well and without much fuss. The only real fit issue I had was with the main wings. You will need to check references to get the main wing dihedral correct as the wings have a flush joint. The rest of the kit fits together very nicely, and the clear canopy's snug fit is a real plus.

My thanks to Brengun and IPMS/USA for the review copy.

Stuff in the Box
Previous Next