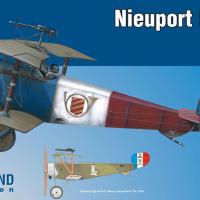 The Nieuport 11, nicknamed the Bébé, was a French World War I single seat sesquiplane fighter aircraft, designed by Gustave Delage. It was the primary aircraft that ended the 'Fokker Scourge' in 1916. The type saw service with several of France's allies, and gave rise to the series of "vee-strut" Nieuport fighters that remained in service (latterly as trainers) into the 1920s.

The kit consists of 53 parts and comes on two gray sprues, and one clear sprue. There are no photo etch parts provided with this weekend edition kit. The parts are nicely molded and there is no amount of flash. All panel lines are recessed and all the sprues have small gates. The 8 page instruction sheet shows the suggested assembly through 4 steps starting with the cockpit / interior assembly, and progressing through the fuselage, wing, landing gear, and cowl assembly. Also included is a rigging diagram. The clear sprue part for the wind screen fit with no problems.

This kit fits together very nicely and no filler was required to fill any seams. I had no problems with gluing together any of the subassemblies. Some of the pieces required any cleaning up of a very fine seam line. I broke the Lewis gun mounting brackets while attempting to clean up the mold lines. So I fabricated the mounting brackets from fine rod. I built this model as the French Aircraft flown by Lt. Armand de Turenne. There is even one pilot figure included though it is not included in the parts count. There are also a large number of unused parts hinting that these sprues have parts for later versions. Decals are provided for all cockpit instruments and lay down with no problems. I used the decal provided for the seat belts but I cut them out still attached to the backing paper and glued them to the seat. Doing so adds a little thickness to the seat belts. For the rigging I used fine piano wire and predrilled the location holes.

The paint call outs provided in the instructions are for Mr. Color paints. I painted the interior and exterior of the aircraft using the equivalent Tamiya paint.

There are two decal options for this Nieuport Ni-11:

The decals are thin but printed within register and lay down with no silvering. Again the quality we have all come to expect from Eduard.

Overall the kit is a joy to build and builds into a handsome Nieuport Ni-11!