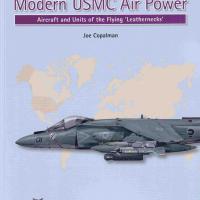 Harpia Publishing has been producing very high quality aircraft books for a while. These books are lavishly illustrated and have covered subjects from subjects covering Iraqi MiGs to Chinese aircraft to specific planes like EMB Tucano. The latest volume is Modern USMC Air Power written by Joe Copalman. This is 256 pages of soft cover wonderfulness. The first thing that hits you is that the pictures in the book are amazing pictures all in perfect focus, great flying shots and lots and lots of them. Wow!

As you can see it is very thorough.

A note about this review- when doing a book, I usually included 6-8 photos. The photos are so wonderful and crisp, I included 15 with the covers. Let’s dive in and look at the book specifically. The history section up front is small as this book focuses on modern USMC but it does touch upon the overall history of Marine aviation from start to current. A note too, one thing I found immensely helpful was the Abbreviation section. Like most military books, there are a LOT of abbreviations and it was good to have a place to go to and find out things like VMM means Marine Medium Tilt Rotor and that JPADDS means Joint Precision Air Delivery System. I love information!

The next few chapters cover the layout of the air groups and designations, and the home bases and what type of aircraft is assigned to it. And then we jump into planes starting with trainers. This covers all trainers from propeller driven to jets to helicopters.

We then move to the helicopter sections which are broken up into three sections based on the use and mission of that helicopter. Each section is lavishly illustrated with action shots in Afghanistan and other places and shows everything from refueling to CH-53E lifting and moving HUMVEE’s, interior shots of the cockpit, attacking the enemy and many more up to the Osprey. All of the pictures have text included which details particular things about the aircraft involved, interviews with the people using them and also details of missions and deployments. The coverage is thorough, and pictures are crisp and wonderful.

The next several chapters get into the attacking portion of the marine inventory covering Harriers, EA-6B ProwlersF-35’s, and F-18 Hornets – lots of Hornets. These are covered in the same way as the helicopters with actions shots, details and interesting color schemes. There is a large focus on these planes in Afghanistan also and their roles. Suffice it to say, it is interesting reading. The chapters end with many of the units transitioning to the F-35 and there are plenty of pictures and text covering that transition.

The next sections of the book cover fighter training, aerial refueling and transport and support airlift. These are covered with the same pictures and text again. Lastly, UAVs, Test and Evaluation and the future are covered, and I found this part fascinating. The marine corps has been using drones for 30 or more years and the book covers the iterations, types and uses of everything from portable small drones that are easily deployed to active areas. The book even covers the smaller handheld drone almost like you would see at Hobbytown. Cool stuff. There is also a section on “the Executive Flight Detachment” which is the helicopter that serves the president. And to finish the book is a section of the patches for every Marine Corps air wing.

This is a magnificent book and should be in the collection of everyone even slightly interested in current marine Corps aviation. It is well written, extremely informative and as I have said, it is the best set of pictures I have seen in a book, ever! Highly recommended.

My thanks to Harpia for producing the book and Casemate Publishers for the opportunity to review it. Go get one now!