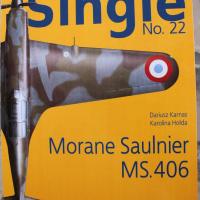 This book is part of a series that has recently become available, and covers one particular aircraft in great detail. It is aimed primarily at scale modelers, and provides enough information for a modeler to build a highly detailed model of this particular aircraft. All of the issue I have seen follow the same format, with a set of 1/72 and 1/48 line drawings of the aircraft, a series of black and white photos taken while the plane was in service, or just afterwards, a series of detail perspective drawings of various components of the aircraft, such as landing gear, cockpit details, structural features, and other items showing disassembled parts of the aircraft. In both volumes, there are two color photos of Finnish MS406’s dated 1942 and 1943, and at the end of each volume is a four view color drawing. Volume 22 features a French aircraft with Polish markings on the fuselage, while Volume 22a shows a Finnish MS-406. The plan views of both aircraft are repeated on the cover. Other than the last 3 pages, and the cover drawings, both issues are identical.

These books do not present a lot of historical detail, as this is available elsewhere, although there is some information included in the captions for the black and white photos. These show, in addition to the aircraft, photos of some of the ground servicing equipment and other items which would be found next to an operational aircraft during wartime. If the modeler wants to build a model showing the airplane with parts removed, or even after a crash landing, there is certainly enough information here to build a model in that condition.

Although these books are numbered in sequence, 22 and 22a, they are basically identical except for the last three pages. Issue 22 has two black and white photos of MS-406’s with French and Polish markings, such as were used by the Polish Air Force in France during 1940, along with an excellent color four view of a Polish marked MS-406 in France, while Issue 22a has two photos of a Finnish marked MS-406 fitted with non-retractable skis, along with the superb four view color drawing of a Finnish MS-406. So the buyer can choose the volume that is needed for the model that will be built, and save some money, or just get both volumes and keep them for reference. They really aren’t that expensive.

The books are very well done, with excellent photos and drawings, and I would recommend getting both issues if you have any serious interest in the MS-406. Highly recommended.

Thanks to MMP Publications and Phil Peterson for the review copies.