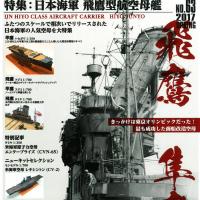 Model Art Issue 63 is typical of other Model Art magazines in that it is written entirely in Japanese, with occasional English words, usually in article titles or in captions. The Vessel Model Special is a quarterly issue that focuses on naval subjects. Each issue leads off with either short articles on a finished build or an in depth step-by-step ‘how to’ on the build and painting. The finished model photographs are of high quality in brightness, color, and depth of focus. Advertising comprises the inside covers (and back cover) along with another four pages showing what is available and new, always useful for building up that wish list. I counted 537 photos and drawings (mostly in color) along with eighteen 1/700 scale drawings. You will find throughout this journal, period photographs of the real ships and aircraft involved in battle. Additionally there are a lot of color scrap drawings highlighting details in the Ship Construction series.

There are a lot of incredible models in this Spring edition as I was just amazed at what could be done in 1/350 scale, let alone in 1/700 scale. This issue’s feature is on the IJN Hiyo Class aircraft carrier and includes one build review of the Hasegawa 1/350 scale kit, three builds of the Fujimi 1/700 scale kit, and two builds of the Tamiya 1/700 kit. The IJN Hiyo Class aircraft carriers consisted of two ships, the Hiyo and the Junyo. Both were originally envisioned as luxury passenger liners but were acquired by the IJN for conversion in 1941. IJN Junyo was actually completed first and participated in the Aleutian Islands. Both ships saw plenty of action. IJN Hiyo sank in June 1943 from a torpedo hit. The Junyo was torpedoed in December 1944 and was under repair when the war came to a close.

The step-by-step build of the Hasegawa 1/350 IJN Junyo includes the use of photoetch and other aftermarket sets to improve the kit parts. Check out the photograph of the scratch built 1/144 bridge of IJN Junyo on page 69 to see the incorporation of photo-etch and scratch build detail that can be done in a scale ship model. The other 1/700 build articles include techniques on how to use wooden decks and photoetch to create some amazing representations in scale. To complete the feature on the IJN Hiyo Class, three-view drawings in 1/700 are presented as is a pictorial on the history of the IJN Junyo and IJN Hiyo. My favorite section of the Model Art magazines is the Ship Construction series where color paintings are used to help expand on the black and white period photographs. This issue focuses on IJN aircraft carrier systems for launching and landing aircraft from the carrier.

I find the Model Art magazines useful, even though I don’t read Japanese. The pictures of the built up models, articles showing the build process, painting features, and historical photography all provide useful information. Model Art magazines are available from Dragon Models USA’s many retailers and from various overseas retailers, such as Hobby Link Japan, Hobby Search 1999 Models, and Lucky Model.

My thanks to Model Art and IPMS/USA for the chance to review this great issue.