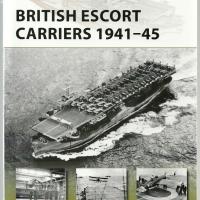 This book is relatively short at 48 pages but don’t let the relatively small thickness of the book fool you. The book is packed with information. It clearly describes the need for air cover for convoys and how out of necessity many merchant ships were converted to operate as a ‘proof of concept’. Once the value of the Escort Carrier was proven, the larger US industrial capacity provided the vast majority of the Escort Carriers under British Flag.

The main sections of the book are “Design and Development” and “Operational History”. You get a rundown of each British Escort Carrier Class (even if the class only had a few hulls), with details on each one of them. I’ve found of great interest the MAC ships, which retained their cargo capacity and had merchants’ crews on them, except for the Air Flight staff detached to it.

The Operational History section describes the main role and/or operation that each carrier participated and lists which theater it was assigned to (Home Fleet, Atlantic, BPF, etc.). This section does not describe the combat actions, but the participation in each operation.

One of the last sections includes a table listing the aircraft types detached to each carrier during combat operations. I’ve found the variety of aircrafts serving in each carrier very interesting.

The author and the artists have done superb work providing good level of detail, great color artwork, plus period photos in an easy to read and informative book.