British Sloops and Frigates of the Second World War 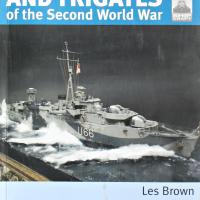 Casemate Publishers presents ShipCraft 27, British Sloops and Frigates of WW2 by Les Brown from Seaforth Publishing. This long-awaited book is a ship modeler’s dream come true as a reference work on the large numbers obscure but important Royal Navy antisubmarine warships that helped turn the tide in the Battle of the Atlantic. This easy-to-digest book details each of the 17 classes of sloops and frigates used by the Royal Navy in WW2. These mostly forgotten, smaller warships focused on convoy escort duties and helped revolutionize antisubmarine warfare tactics. This book lists class history, available model kits, model accessories, many photographs, camouflage examples, line drawings and color plates of finished models – a superb reference for these plentiful ships with many possibilities for modelers.

Les Brown is a well-known and accomplished British warship afficionado and builder of beautiful models, with a long history of championing smaller British warships. His latest book is ShipCraft27 from Seaforth Publishing, a line of books that focus on one type or class of warship, with an eye to helping modelers build kits to a high degree.

British Sloops and Frigates of WW2 covers the various classes that made up these unsung but important small warships that held the line on non-fleet escort duties before being mass produced and sweeping the seas of U boats. As usual, Seaforth Publishing has produced a book chock full of excellent quality photographs, color plates of first-class models of these ships, with camouflage patterns and line drawings, as well as all the available kits and accessories of these ships from 1:2500 to 1:96 scale, including paper card models.

68 pages (including all sides of the covers) of glossy pages with rather small print in two columns per page, loaded with B&W photos of ships, and color photos of kits, built models, color camouflage patterns and detailed line drawings (by George Richardson) in ~1/600 scale (yes, I measured several drawings). There are 40 B&W photos (mostly of excellent quality and clarity), 60 color photos of kits and accessories, 78 color photos of finished models, 25 color camouflage plates, and 36 B&W plans of overhead and starboard side profiles. The text covers design, construction, modifications, brief histories, outstanding single ship actions, operations, tactics and fits.

418 ships were built in 17 classes (18 counting each US destroyer escort class – both were Royal Navy Captain class frigates) from the late 1920s to 1945. Starting as minesweepers, their roles quickly changed during the war to convoy escort, and became the ships in between smaller corvettes (i.e., Flower class), trawlers and leftover WW1 destroyers and fleet destroyers. Their roles morphed into antisubmarine and antiaircraft roles for convoy protection, with armaments to match, and also to close support for amphibious landings. In essence, these would be considered destroyer escorts in the US, as their top speed was around 20 knots, and they did not usually carry torpedo tubes.

Altogether a very satisfying book for WW2 naval buffs whether you are interested in this topic or not. You get enough knowledge to appreciate what these ships did, and plenty of eye candy for what you can do for modeling these subjects. While not an encyclopedia with all the detailed, in-depth dimensions and characteristics, this book can greatly aid accurizing the available model kits in any scale. Coverage of US destroyer escort classes used as frigates and US Coast Guard cutters as sloops is a bonus.

This book is a must-have for avid WW2 Royal Navy ship modelers, and also a resource for US Navy destroyer escorts of the earlier Everts and Buckley classes. Attention for these important escorts is long overdue and they should be much more popular modeling subjects than they are now. Highly recommended for WW2 naval afficionados, modelers and anyone looking for obscure subjects.

Thanks to IPMSUSA for the privilege of reviewing this superb reference for WW2 warship modelers!